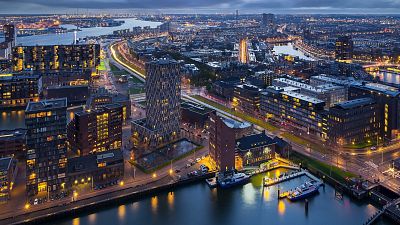 Love it or hate it, the return of Eurovision in 2021 is a sure sign that the world is finally returning to normal. Following last year’s cancellation, the event is taking place in Rotterdam - originally the location for the 2020 competition and with many of the same representatives performing.

Here, we take a look at some of the main attractions in The Netherlands’ second city.

A city of rivers

Rotterdam lies on the banks of the Nieuwe Maas, the tidal southern branch of the Rhine River, where it’s joined by the smaller River Rotte.

Great news for the sightseers, because this aquatic backdrop to the city means it’s home to worthwhile visits including the Maritime Museum. Rotterdam’s port is one of the oldest in The Netherlands, and the museum explores the city’s maritime past.

The presence of rivers also means bridges. The Erasmus Bridge is an especially notable view, built in the style of the classic ‘millennial’ bridges which have popped up across city centres in the past couple of decades. Completed in 1996, the bridge connects the north and south parts of the city.

The Netherlands is famous for pancakes and rye bread, and food fans can’t miss a trip to the Markthal. Originally built for office space and residential use, the many restaurants and stalls have become this unique building’s main attraction.

There are a whole host of restaurants dotted around the city, too. From Michelin stars to marine-side eateries, visitors are spoilt for choice.

A mix of old and new

Rotterdam is predominantly a metal and concrete, metropolitan city - largely because of the devastation caused during the second world war which means much of it was rebuilt and modernised. But its remaining historic corners are some of the most charming in Europe.

Delfshaven is one such spot. The old harbour was spared the bombings, and remains standing today as one of the most picturesque districts in the city. While you’re there, make sure you pay a visit to the Pilgrim Fathers’ Church and stop off for a cold beer at De Pilgrim Brewery.

Other things you need to see and do

If you travel to Rotterdam by train, your tour can begin as soon as you step onto the platform. Rotterdam Central Station is an impressive gateway to the city and in normal times can see up to 110,000 people pass through it each day.

Rotterdam Zoo is designed by continent and country. Featuring rare species including black rhinos and polar bears, it’s a great way to pass the day if you’re travelling with young children.

Miniworld Rotterdam takes visitors through the historic and modern city in miniature, with more information about the districts and buildings along the way. Perfect if you don’t fancy a bus tour.

Find out more about what you can do in Rotterdam here.