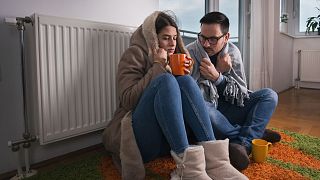 Millions of people in the UK are feeling the impact of a €700-a-year (€800) rise in energy costs, as the price cap rose by more than 50 per cent yesterday, 1 April.

Energy suppliers’ websites crashed the evening before, as people tried to submit their meter readings before the unprecedented price hike - which comes amid a wider cost-of-living crisis.

Home insulation is touted as one of the best fixes for individuals. A means to cut energy usage, emissions and - surprisingly still relevant given the UK’s unseasonal snowfall this week - stay warm.

Homeowners have been urged to invest in roof, wall and floor insulation; as well as other energy-saving measures, which the IEA has suggested as a helpful course of action in response to Russia’s war.

But what can you do to improve your home’s efficiency if you're renting? It can be tricky to take action, especially in the UK’s insecure rental market.

“In terms of making demands on landlords, security of tenure is obviously crucial,” says Ruth London of Fuel Poverty Action. “And so are tenants and residents associations, which have been systematically sidelined and disempowered by both local authority and housing association landlords.”

If you’re renting privately and want to make your home more energy efficient and eco-friendly, here’s what you need to know.

Yes, landlords are legally obliged to improve the leakiest homes

Since April 2020, private landlords have been responsible for upgrading your home’s energy efficiency if it falls below an EPC (energy performance certificate) rating of E.

An EPC rating measures the energy efficiency of homes on a scale of A-G, with A being the most efficient and G being the least. Landlords are obliged to provide you with this certificate, if you’re unsure which band your home falls into.

Under the government’s ‘Minimum Energy Efficiency Standard’ (MEES) regulations, the owner has to up G and F rated properties through measures like solid floor insulation, drought proofing and low energy lighting - spending up to £3,500 (€4,150) to get an E.

There are exemptions to this - for example, if cavity wall insulation would damage the fabric of the building - but Citizens Advice will be able to help you determine if your landlords’ excuse is legitimate.

The bar is set to rise however, as the government is aiming to get as many homes as possible to a C rating by 2035. With this in mind, landlords should recognise it’s in their interests to install upgrades beyond the bare minimum. (The housing sector is lagging behind office renting in this sense, as the government has set a far more ambitious target of B by 2030 for non-domestic spaces).

But what if your home has an EPC E rating and you’re still feeling the cold?

For the last six years, tenants have the right to ask landlords to undergo energy efficiency improvements - and they can only refuse if there is a compelling reason to do so.

The catch, unfortunately, is that they’re not obliged to pay for the improvements to the place they own. According to HomeLet, landlords should be met with no upfront costs. Though they might also realise they stand to gain from making their properties more appealing to future tenants.

Moving more rentals from the private to public sector would help speed up the mass retrofitting Britain’s leaky homes need, according to a spokeswoman for the Radical Housing Network.

Grace Lally added that she had spoken to a renter whose landlord has recently increased their rent by £200 (€423) a month (a 20 per cent hike), using the excuse that the money will go towards meeting new insulation standards in the future.

“With [the] current lack of rights for tenants all costs will be pushed onto tenants or work won't get done at all. So I think policies we need should be a combination of rent controls with very high retrofit standards imposed on all landlords within a short period of a few years,” she said.

This should be “accompanied by a huge funding pot for local authorities to buy up private rental properties from landlords who can't afford the retrofit (with tenants protected and transferred to council tenancies).”

There are some dodgy landlords, and some hopefully responsible ones. We need policies that are appropriate for both types.

Giving both an insulation campaigner and landlord’s perspective, Insulate Britain spokesman Matthew Tulley told Euronews Green, “There are some dodgy landlords, and some hopefully responsible ones. We need policies that are appropriate for both types of landlord.

“The more we understand both sides of landlord (private, HA or Council) and tenant the better we can design programmes to support a rapid and radical transformation of housing stock.”