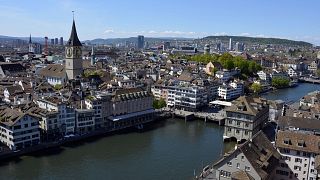 Zurich is shutting down its natural gas network in whole sections of the city to fight climate change - and save money.

Switzerland’s biggest city started the plan a decade ago as part of its environmental strategy. Residents are being encouraged to install alternatives to natural gas heating and, where this is already taking off, Zurich’s city-owned utility company is now shutting down gas supply networks.

“Distance heating networks that make use of renewable or climate-neutral energy have priority over the gas network that is mainly fed with fossil natural gas,” explains Rainer Schöne, a spokesperson for the utility company, Energie 360॰.

“In areas where those distance heating networks exist or will be built, the natural gas network will be shut down.”

Alternative heat sources have already been popular in parts of the city for decades. This includes “distance heating” which uses excess heat from waste incinerators to warm water that is then pumped to homes through pipes.

About 10 years ago, Zurich made the decision to start shutting down natural gas networks in these areas for economic reasons. It didn’t make sense to maintain both networks.

But when the policy was announced in 2011, it was controversial as many believed they did not have enough time to change over to renewable sources.

“Originally the announcement of the shutdown included an obviously too short notice period of only a few years,” Schöne says. “This was the reason why the shutdown was postponed by five years. This gives the remaining customers sufficient time to switch.”

The current shutdown is due to be completed in 2024 with more areas of Zurich set to see the end of natural gas between now and 2040 as more distance heating projects are rolled out.

Switching away from natural gas after Russia’s invasion of Ukraine

Thousands of demonstrators gathered in the capital city of Bern earlier this month to protest the war in Ukraine. Among their demands was a call for a reduction in Switzerland’s reliance on Russian fossil fuels.

An estimated 47 per cent of the natural gas used in the country is imported from Russia and consumers now want that to change.

After the invasion of Russia in Ukraine we received many questions from customers about how to get rid of Russian gas.

“After the invasion of Russia in Ukraine we received many questions from customers about how to get rid of Russian gas. Our response is to switch from heating using natural gas to solutions using renewable energy as soon as possible,” Schöne says.

Although Zurich’s plan hasn’t necessarily changed after the invasion of Ukraine, Energie 360॰ says it has recently noticed this growing desire from gas customers to switch to other options.

“This supports the current process and will also push the rollout of more distance heating networks and the future shutdowns of the gas network in those areas.”