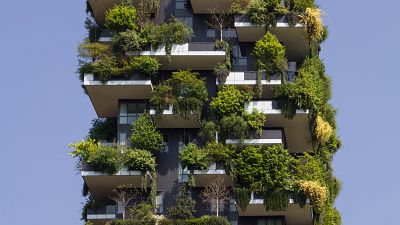 The Bosco Verticale in Milan has become an example of green architecture   -   Copyright  Victor Garcia / Unsplash
By Sarah Palmer  •  Updated: 03/06/2021

When we think of a sustainable holiday, a city break isn’t usually the first thing that springs to mind. Busy roads, built up areas and high volumes of traffic seem worlds away from the self-sufficient beach hut vision.

However, there are options out there. In a world that is more focused on protecting the environment than ever before, governments around the world have had to up their game when it comes to the fight against climate change.

With that in mind, Uswitch has analysed cities around the world, based on several factors to determine their sustainability:

So where are the world’s most sustainable cities?

Denmark prides itself on being a frontrunner in the transition to a greener economy, so it’s no surprise to see its capital in the top five. The city’s proximity to water and high volume of green spaces makes it one of the happiest places in the world - as well as one of the most sustainable.

In arguably a bit of a wild card appearance, Dubai also ranked as one of the top five sustainable cities in the world. It even has its own project dedicated to the cause. Aptly named ‘The Sustainable City’, it is designed to prioritise a lifestyle with green living in mind.

Brisbane’s sustainability strategy is rooted in the natural environment surrounding the city. Its community promise to be ‘Clean, green, sustainable 2017 - 2031’ focuses on clean air, biodiversity and low carbon emissions.

The Spanish capital is home to 300,000 trees and 64 square kilometres of green space, making it a sustainability frontrunner in many studies over the years.

Madrid’s luscious parks are one of its many tourist attractions. They include the Monte de el Pardo, a protected natural park that is roughly 50 times the size of New York’s Central Park.

According to Uswitch’s report, Canberra, Australia is the most sustainable city in the world.

The Australian capital has excellent public transport service, providing 48 per cent of its energy in sustainable ways. The city also scored among the lowest in the pollution index.

Canberra relies heavily on solar power and nearby wind farms, which enable 94 per cent of its residents to have internet access.

Australia has often been seen as a leader in sustainable development as they recognise the role it plays in the wellbeing of their people and country.

Where are the least sustainable cities?

Jeddah is the least sustainable city on the global index. The city is heavily reliant on oil and gas as Saudi Arabia's economy is funded by fossil fuels. Due to the production of crude oils, this has significant effects on air pollution in the city and the greenhouse gases that this produces contribute to global warming.

The younger generation has been championing Saudi Arabia’s Vision 2030, however, which has a strong focus on creating more diverse and sustainable energy in the future.

Up to 50 per cent of residents live in slums without access to proper water supply or waste management. Research reveals that the number of vehicles in the city has increased by over 97 per cent in the last decade, causing heavy air pollution and congestion.

Here’s what the experts have to say

“Around the world, we’re becoming more aware of our environmental impact on the planet, and in recent years we’ve seen a clear increase in people actively trying to be more sustainable,” says Will Owen, energy expert at Uswitch.com.

“However, where you live has a big impact on how easy it is to be green. Many cities are committing to environmental change and making it easier for their residents to make greener choices in their lives.

He adds that the study highlights which cities are leading the way in sustainability- and those that need to do more to reduce their environmental impact.

A guide to the ultimate vanlife routes