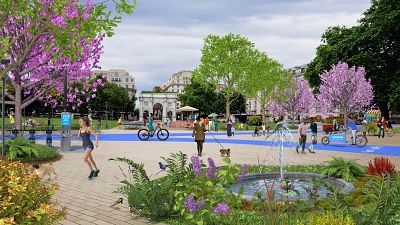 “If you don’t seek it, you won’t see it. That we all know,” Beyoncé belts out on her latest track. It’s unlikely she had urban planning in mind, but this is the message at the heart of a bold new vision of how London and Berlin city centres could look.

Cars are responsible for 12 per cent of total CO2 emissions in the EU, and around 55 per cent of all transport emissions in the UK. That has to change if we’re to halve greenhouse gas emissions by 2030. It is also needed if we are going to stop the extreme heat that is making midday drives unbearable this week.

“It’s clear that cities such as Berlin and London currently have too many streets and roads which are dominated by and designed around cars and not people,” says Anna Schmalko-Methorst, Shimano's urban category marketing manager.

Innovative visual designer Jan Kamensky partnered with the company to make these videos for a new ‘Future Cities’ project hosted by Shimano at the annual EuroBike trade fair.

“Transformation also begins in the way we see our world,” he says.

“Utopia is helpful for this. It breaks with our habits of seeing. It is disruptive. It makes us look at the present with a new eye and it helps to inform our actions. Let's begin to see our world in a new way.”

In London, the iconic area around Marble Arch - by Oxford Street and the corner of Hyde Park - is notoriously busy with vehicles. Multiple lanes of traffic dominate the famous landmark.

It was the laughing stock of tourist attractions last summer, when Westminster City Council spent £6 million (around €7 million) constructing a giant ‘Mound’ next to the monument. The unpopular attraction was swiftly dismantled in January.

Kamensky’s vision is more down-to-earth. His video strips away existing elements of the street and replaces them with infrastructure and furniture designed for people.

It feels like an extension of Hyde Park, encouraging cycling mobility, wellbeing and enjoyment.

Built between 1952 and 1960, Karl-Marx-Allee is a prominent shopping destination. It is almost 90 metres wide and nearly 2 kilometres long.

The road however is dominated by traffic. It was selected by Shimano due to its size and potential for being re-imagined in a way that still retains its inherent Berlin nature, but dramatically changes its usage.

In a customised animation, Kamensky lifts the cars and traffic furniture away, transforming the location into a cycling and walking utopia. Trees line the road, there are wide cycle paths with a range of bikes in use, people walking and birds flying by.

Do you wish your city was better designed for bikes?

Cycling has been part of modern city-life across the world for decades, but only recently has widespread recognition of its ability to effect change been noticed, says Shimano.

The pandemic saw a major uptick in cycling. Pop-up infrastructure and new work/life habits led to a 119 per cent increase in cycling in London between May 2019 and 2020, according to data from the Strava sports app. In Berlin, the bike spike was 56 per cent between April 2019 and 2020.

More and more people are experiencing the health and wellbeing benefits that come from ditching cars, but they need to be met halfway with viable transport routes.

“We’re proud to be launching our Future Cities project, in line with our mission to promote health and happiness through the enjoyment of nature and the world around us,” adds Schmalko-Methorst.

The project aims to spark public conversations about what other European cities are ripe for a re-design with more video transformations from Kamensky in the works.

Pontevedra in Spain and Copenhagen’s Strøget are notable examples of European areas that have already been pedestrianised, providing further, real life inspiration.