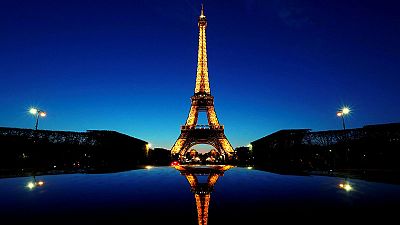 Paris's midnight skyline will look a little different from the end of this month.   -   Copyright  REUTERS/Christian Hartmann
By Lottie Limb  with AFP  •  Updated: 14/09/2022

It’s known as the City of Light, but Paris will be dimming some of its monuments in response to the energy crisis.

The Eiffel Tower is set to fall dark over an hour earlier, under new energy sobriety plans announced by Paris mayor Anne Hidalgo today. While the city council will be switching off its own grand home of Hôtel de Ville from 10pm as an example to residents.

It follows a raft of national measures from President Macron, who last week called for a 10 per cent reduction in energy use to avoid the risk of rationing this winter.

Most of the country’s energy comes from nuclear, but with half of its reactors currently offline, France is seeking alternative supplies including electricity from Germany which is facing a severe gas shortage after Russia stopped its supply.

In stark contrast to the UK, Macron is fully renationalising state-owned electricity provider EDF, and continuing to cap energy prices at 4 per cent for consumers.

But the calls for “collective sobriety” in energy use in France are getting louder.

Where is Paris turning lights off?

The Eiffel Tower is typically illuminated until 1am by an elaborate lighting system that creates the iconic golden glow. Parisians are also used to an hourly twinkle from the tower at night, thanks to 20,000 flashing bulbs.

While monuments around the globe lit up with a British flag in honour of Queen Elizabeth’s death on Thursday, Paris’s most famous monument went dark in homage to Her Majesty.

It was an unusual step, but earlier ‘lights off’ are the direction the Eiffel Tower is heading in this winter. Paris city hall is proposing to turn them off at 11.45 when the last visitors leave.

Night-time illumination accounts for only 4 per cent of the Eiffel Tower's annual consumption.

The town hall, just across the river from Notre-Dame cathedral, is among municipal monuments which will fall dark at 10pm.

Mayor Hidalgo is seeking to extend the curb to buildings not owned by the municipality, BFMTV reports. It adds that if public street lighting will not be turned off, lights will at least be dimmed from 23 September.

What are Paris’s new heating rules?

Paris will also be dialling down the heating to save on energy.

It’s hoped these small changes will make a significant difference when implemented across the whole city, and also help to speed up Paris’s energy transition under the city’s Climate Plan.

First deputy mayor of Paris Emmanual Grégoire drew a direct line from this summer’s order for air-conditioned shops to close their doors, stating that shops will now have to keep their heat in.

He added that he wants to give shopkeepers an array of tools to reduce their consumption, and questioned “the use of light as a commercial attraction.”

Lille, Marseille, Montpellier and Lyon are leading the way with blackouts

A number of French towns and cities have already decided to ration public lighting and heating in order to limit their soaring energy bills.

One of the most striking measures came from Lille, which stopped lighting public buildings at night at the beginning of September, except for the Grand'Place and the Place de l'Opéra, which will allow it to save 170,000 kWh per year.

Marseille has taken a similar measure, with lights going out at 11.30pm, and 10.30pm in winter for its 140 monuments, with Notre-Dame-de-la-Garde as the only exception.

Since July 2021, the emblematic Citadelle built by Vauban, which dominates Besançon, has not been systematically lit at night "to reduce energy consumption, preserve biodiversity and limit light pollution".

The same reasons are given by the city of Montpellier, which in April decided to switch off public lighting on five roads.

In Lyon, the metropolitan authority has set the heating temperature for its buildings at 19°C this winter to cope with the anticipated doubling of energy costs (from 55 to 100 million euros) in 2023.