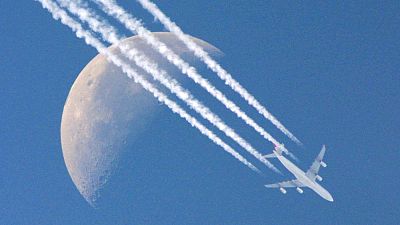 Google has been accused of downplaying the climate impact of our flights after making changes to its widely used travel search tool.

It means that trips found through ‘Google Flights’ appear to have much less of an impact on global warming than they did before. That’s concerning news as nine out of every 10 online searches occur through Google and the tool inevitably appears towards the top of flight search results.

Scientists warn it is leading people to underestimate the true climate cost of their travels.

Google has airbrushed a huge chunk of the aviation industry's climate impacts from its pages.

The company said it made the change following consultations with its “industry partners”, but told the national broadcaster that it does “strongly believe” non-CO2 effects of aviation should be incorporated in the feature and will look into the matter further.

So just how big an omission is this?

What are the non-CO2 impacts of flying?

It’s understandable that there is a focus on CO2 emissions as we try to stop global warming from exceeding 1.5C from this time.

But CO2 is not the only greenhouse gas or pollutant we need to keep an eye on. In fact the carbon released by burning jet fuel may be the ‘tip of the iceberg’ as far as aviation’s footprint is concerned, says Transport & Environment (T&E), a group of organisations working to reduce the environmental impact of transport.

Aircraft engines emit nitrous oxides and sulphur dioxide as well as particulates such as soot when fuel is burnt. At high altitudes, these emissions can affect the physical and chemical properties of the atmosphere, leading to an increase in greenhouse gases and the formation of contrails (condensation trails).

The industry has hidden this problem for decades

While these long, thin clouds look pretty from the ground, they also trap heat radiated from the Earth, contributing to global warming.

A European Commission report from 2020 found that the non-CO2 impact of aviation was twice that of CO2. But T&E argues that these emissions were overlooked by the EU’s most clean aviation laws, and the latest science suggests that around two-thirds of the climate impact could be unregulated.

Overall, the sector is responsible for around 3.5 per cent of human-caused global warming.

"The industry has hidden this problem for decades,” says a spokesperson from T&E.

“Google should show customers the non-CO2 effects for each flight, as the European Parliament has proposed to do."

What impact could Google's (mis)calculations have on the travel sector?

It’s not just those directly using the Google Flights tool that could be misled about their trips.

The company’s carbon calculation methodology is seen as the industry standard and has been built into a number of big travel sites.

Skyscanner, which receives more than 100 million visitors a month, uses the data supplied through Google’s partnership with Travalyst.

The non profit organisation, founded by Prince Harry, has also partnered with Booking.com, Expedia, Tripadvisor and Visa in a bid to ​​standardise sustainability labelling frameworks in aviation.

“We agree that CO2e (equivalent) emissions are a critical factor in calculating the impact of aviation on the environment,” a spokesperson from Travalyst tells Euronews Green. “However, it is crucial that we strive for alignment in how these impacts are calculated.”

The organisation argues that until academics, governments and industry agree on how these emissions should be factored in, the data could confuse consumers. “We are fully committed both to helping drive these efforts and to reintegrating this factor as soon as possible,” it adds.

Though accounting for these emissions in estimates is a foggy area of climate science, some have found a way to make sure the cost is considered.

The UK government, for example, advises that companies multiply the CO2 emissions from a flight by a factor of 1.9, effectively doubling their impact to get closer to the true cost of flying.