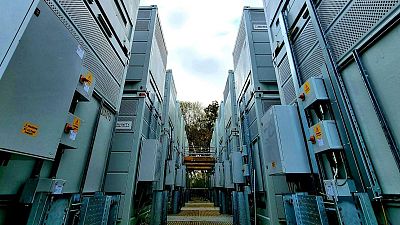 The race is on to reach the point where energy storage can match renewable generation.   -   Copyright  Invinity
By Lottie Limb  •  Updated: 21/07/2022

Renewables are a promising tool in the fight against climate change, but they have an essential bedfellow.

“The only thing that’s holding those resources back from becoming 100 per cent of our total electricity generation is the ability to store that energy and dispatch it as needed,” Matt Harper, co-founder and CCO of Invinity Energy Systems, tells Euronews Green from the US.

That, and the clutches of the fossil fuel industries of course. But Harper’s firm is leading the movement to bottle sun and wind resources, to bridge the supply and demand gap when night falls and the turbines stand still.

Not only have there been incredible breakthroughs in solar, wind and hydropower, the cost to generate clean energy has plummeted. It’s now far cheaper than fossil fuels.

Case in point: the UK has just secured record-breaking renewable energy contracts that will generate electricity four times cheaper than the current cost of gas.

Renewables, grids and storage now account for more than 80 per cent of total power sector investment globally, according to recent analysis by the International Energy Agency (IEA).

“Our company is not the only one that’s going to have a part in this,” says Harper. “There are different technologies that are going to solve different parts of the storage problem.”

How do lithium and vanadium flow batteries work?

Invinity’s contribution to the storage conundrum is a vanadium flow battery. These devices store energy in a liquid form (electrolyte), which is pumped around large tanks and passed through a ‘cell’ to convert it into power when needed. This is different from a conventional battery where, as Harper describes it, both energy and power are “wrapped up in the little chemicals inside.”

Compared with lithium - the metal currently dominating the energy storage market - vanadium differs in a few key respects. It works in this liquid state because it can take on both a positive and negative charge (essentially, the frisson that creates a battery). And - because there's no interaction with other chemicals inside the battery - vanadium can charge and discharge energy over tens of thousands of cycles without degrading, “conceivably for centuries.”

Although it is not without extractive issues, vanadium appears to be a more sustainable choice than lithium. It is more common than lithium and copper. Once mined to sharpen swords, the vast majority of this metallic element is now used in strengthening steel. Since it is also a byproduct of petrochemical refining processes, there are “hundreds of millions of tonnes of vanadium sitting there waiting to be repurposed in waste piles.”

Is vanadium better than lithium?

Lithium-ion (Li-ion) batteries have come to dominate more than 90 per cent of the global grid market. Dazzling photos of South America’s ‘lithium fields’ show how embedded they are in our lives; though the scars of soil degradation, biodiversity loss and water conflicts are less visible. They carry a fire risk too: last summer, thousands of Illinois residents were evacuated when a blaze broke out at a warehouse storing the batteries, spreading toxic air.

Yet lithium is the backbone for the tremendous growth in renewables. It’s in our smartphones, headphones, bikes and all kinds of appliances. “Over the last five or six years, lithium-ion batteries have proven that they can solve some of the trickiest problems on the electric grid,” says Harper. Vanadium’s rival metal, he concedes, does a great job of managing peak loads on the grid, while Invinity’s design excels at absorbing 6-to-12 hours of solar, for example.

It’s a major innovation, but the stories of EVs and energy storage issues have been entangled from the very beginning.

Why did lithium take over the energy storage industry?

You’re as likely to have heard of Wärtsilä via marine as energy news. The Finnish company’s first real foray into energy storage began five years ago when it acquired Greensmith Energy, a US firm that was working on storage solutions. Andy Tang came with the move; he’s now vice president of energy storage and optimisation at Wärtsilä, having watched ‘stationary storage’ - almost like a younger brother to the batteries in EVs, he says - grow up.

Greensmith’s original goal, Tang explains, was to be a software company that helped the utilities to control storage. After waiting and waiting for the storage market to arrive, “we realised that, in order to sell our software, we would have to build the hardware.”

They were choosing their technology in the dark: “We did not feel we were smart enough to say what was going to be the winning technology,” Tang admits. So the company experimented with a dozen different battery chemistries and inverter technologies. “We tried to make our software programme as neutral as possible to whatever the chemistry was.”

But before long a frontrunner emerged. In 2015 the price curve for lithium-ion batteries started coming down fast, Tang recalls. Electric car manufacturers found it was the best fit, so were essentially co-funding the development of factories to build them through huge contracts. It didn’t take much extra spending from the likes of Tesla to move into the energy storage business too.

The dominance of lithium doesn’t mean that other technologies don’t have a chance, says Tang - it’s just that they’re playing catch up. “As we hit the sweet-spot of massive deployments, you have to [consider], if there’s a new technology and they’re talking about a couple hundred megawatt (MW) hours of annual production, we need them to get up to a couple hundred gigawatt (GW) hours before we can really use them in any meaningful way.”

What are the limits on renewable energy storage?

Wärtsilä is now one of the world’s biggest energy storage companies, but its USP still lies on the software side. Tang likes to say that “the hardware side of the equation is just a pile of chemicals sitting in the middle of a field.” They don’t make money unless electrons are moving in one direction or another, and it’s the software that controls those movements - when to charge and discharge - in tandem with the grid and energy trading markets.

This is a serious piece of intellectual property, incorporating AI, machine learning and advanced weather forecasts. But it also needs a human perspective - to know, for example, that a big TV broadcast in the UK means a huge power spike as millions of people turn their kettles on five minutes before.

So what are the limitations? Electric grids are flexible enough to handle some of renewables’ intermittency - when they’re up to around 20 per cent of the market. This, Tang says, is the “magic number”, beyond which grid operators are likely to ‘curtail’ suppliers to stop the grid becoming too unstable.

“One of the things that we see around the world,” notes Harper, from the US west coast to sun-soaked Australia, “is that solar power generation has become so inexpensive that a lot of portions of the electric grid simply aren’t able to absorb any more solar power.” Energy storage is obviously key to managing higher levels of renewable penetration - so, for example, midday solar can be held back until peak demand in the evening.

Which places are already running on solar power?

It’s no surprise that both companies are making big progress in sunny, richer nations - primarily in the US. Wärtsilä has just signed up to deliver one of the world’s largest solar-plus-storage projects with Clearway Energy Group, covering five sites in Hawaii and California. Renewables already make up well over 50 per cent of Hawaii’s energy market, so batteries are being built to match - for example, solar projects of 35MW. Meanwhile, the Californian grid ran on 100 per cent renewables in May, albeit just for one minute.

Over the last few years, engineers have been racing to develop batteries with longer and longer durations, interacting with the grid from seconds to hours. Invinity’s focus is on the 4-to-12-hour window, but, says Harper, “there are other storage technologies coming along that are going to take the power from a very windy November and make sure it’s available at homes in a comparatively still February.

“That sort of seasonal shifting is going to be a further piece of the puzzle if we are to go down that path of full decarbonisation.”

Batteries are not the only solution to our energy storage problems. In fact, the most common form of energy storage in the world is hydro projects. Pumped storage hydropower plants work by controlling the volume of water in an upper and lower pool. When electricity is needed, the ‘water battery’ at the top is released, rotating a turbine which generates hydroelectric power.

Sand batteries are another, more recent innovation. They use grains to generate and store heat. One is already up and running in Finland, with the power to serve the district heating network for months on end. Though it’s on a vastly different scale to Wärtsilä’s operations so far, Tang says sand could have a sizable niche in continental Europe and the UK too. “The challenge is so big that we really need a portfolio of battery solutions,” he adds.

The challenge is so big that I really do believe we need a portfolio of battery solutions.

Financing is key to speeding up the rollout of other technologies - which is where the funding power of EV companies still comes into play. And, though it might not sound like the most exciting vanguard of environmental action, Harper adds that regulatory reform is essential to connecting renewable projects to the grid; developers have said they face a 6-to-10-year wait for approval in the UK.

The race is on to reach the point where energy storage can match renewable generation.

The race is on to reach the point where energy storage can match renewable generation. “Imagine the electric grid in 2040,” says Harper: “You’ve got solar and wind generation, and probably some other sources like geothermal and tidal power, that are providing 100 per cent of our electricity needs.

“But there is as much storage as there is primary generation, because you need to make sure that, as you start to mothball those coal plants and shut down those gas engines, there will remain sufficient electricity from renewable sources to power our homes and industry.”

For those looking to stick with the positive narrative, the growth of the wind-plus-storage business is going to be an exciting thread to follow in the next couple of years.

In decarbonising our energy systems, concludes Harper, “batteries aren’t going to be the only answer, but they are going to be a big part of the answer.”