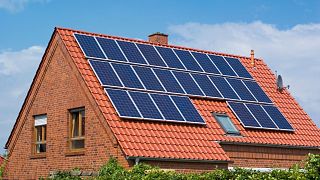 This year has seen the steepest rise in energy prices for years with households across the UK and EU now paying a staggering 54 per cent more than in 2020.

While the governments of many EU countries are offering their residents multibillion-euro aid packages to soften the blow, Brits are not feeling reassured that similar help is on its way.

With household budgets being stretched, many people are looking into alternative methods of powering their homes.

How do solar panels work?

Energy for solar panels is derived from the sun, which can be used to produce electricity and heat. The technology directly converts sunlight into electricity by exploiting the photovoltaic effect. This creates voltage or electrical current when exposed to light.

How many solar panels will I need?

A three-bedroom, semi-detached property housing four people usually needs about 10 solar panels. Purchasing too many can be an unnecessary expense whilst too few can make your purchase unprofitable.

A house of that size would likely have an annual electricity usage of 2,900 kilowatt hours (kWh) every year. 1kWh is able to provide electricity to an appliance for up to one hour.

How much will it cost to install solar panels on a UK home?

According to the Money Saving Expert, if you’re home during the day, it’ll take you less time to make your money back. You’ll retrieve the installation costs in about 13 years on average, if you live in the middle of the country.

Comparatively, if you’re home in the evenings only, it could take you 24 years. Many people would like to install solar panels, but such a high upfront cost is off-putting.

Is there financial aid for solar power installation in the UK?

Financial aid from the UK Government isn’t available. Until 1 April 2019, the Feed-In Tariff (FIT) scheme was offered in an attempt to encourage people to use renewable energy to power their homes.

But now the Government doesn’t believe individuals need to be subsidised as much, because the price of solar panel systems has reduced.

Since the discontinuation of the Feed-In Tariff, the new Smart Export Guarantee (SEG) has been offered as an alternative by the Government. The new scheme allows households to get paid for any extra renewable energy they generate.

That means if you generate energy at home from natural resources, such as the wind or sun, you’re able to sell any you don’t use.

Where are solar panels popular in Europe?

Solar power already plays an important role in the European energy mix. In 2017, the EU generated 3.6 per cent of its energy from photovoltaics and by 2040, solar energy has the potential to meet 20 per cent of the bloc’s electricity demand.

But for solar power to become more of an appreciated and developed source of clean energy across the EU, and the UK, costs must be lowered and their efficiency improved. Despite this, Sweden, Finland, Latvia, Austria and Denmark currently produce more than 30 per cent of their total electricity from renewable sources.

In France, a state grant is available if you plan to use part of the produced electricity for yourself, and sell part of it back to the national grid – known as vente en surplus.

While in Spain, regional grants are occasionally offered, but with a limit on available funds. These grants are not means-tested, but do require proof of Spanish residency with a NIE number.

Is the UK sunny enough to use solar panels?

Despite its reputation for having grey and cloudy weather, the UK gets the same amount of solar energy as certain areas in France and Spain.

And as countries with high solar power use, such as Sweden, Finland and Latvia prove, lack of heat isn’t a problem because the cells work with the sun’s light.

Is now a good time to invest in solar panels?

Solar panels are a significant investment, but after the initial cost, they’re more likely to save you money. If you’re eligible for the Smart Export Guarantee (SEG), there’s also a chance you could make some money back too.

With the cost of living crisis rising further, the electricity your panels generate could reduce the cost of your energy bills - and you’ll be reducing your carbon footprint at the same time.