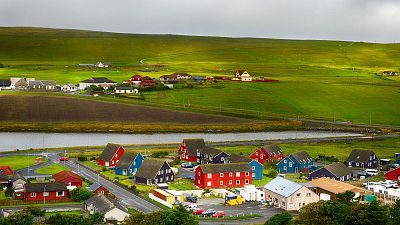 UK bill payers are facing the worst effects of the energy crisis in western Europe. Within Britain’s shores, it is the northernmost isles of Shetland where the 80 per cent jump in the winter energy price cap will hit the hardest.

Around 96 per cent of households in the region will be plunged into fuel poverty by April, new analysis from Shetland Islands Council (SIC) shows.

Why are energy prices in Shetland so high?

Living in a cold oceanic climate means that heating is essential for making it through the long winter months. Shetland also has no access to cheaper mains gas, and a leaky housing stock including old croft houses that are hard to keep warm.

The geographic ironies are not lost on the population in the middle of the North Sea.

“We’ve been at the heart of the oil and gas industry for the last 40 odd years,” says Irvine. “And we have not benefited. We still have the highest energy costs anywhere in the UK.”

The cost of living crisis has come at a transitional time in Shetland’s fortunes, caught between the seabed and the sky.

Irvine’s team has been overseeing the launch of ORION. This major clean energy project is seeking to integrate new wind and tidal power sites with old fossil fuel stations. It is also looking to generate hydrogen as another source of renewable power.

Meanwhile one of the UK’s largest onshore wind farms by output - Viking Energy’s 103 turbine site on the mainland, led by SSE Renewables - is set to become operational by 2024.

It looks as if we’ll remain at the heart of an energy hub which will take us beyond oil and gas.

With UK offshore wind set to produce electricity nine times cheaper than that from gas, investing in the right infrastructure to get more of it onto the grid should be a no brainer - especially somewhere as windy as Shetland.

“It looks as if we’ll remain at the heart of an energy hub which will take us beyond oil and gas into cleaner forms of energy,” says Irvine. But it’s cold comfort to those getting astronomical bills through the door this winter.

“There’s no question that the crisis nationally has moved energy security and affordable energy up the agenda and I think climate change has slipped a bit nationally,” he says, noting a marked difference from last year.

Why more drilling in the North Sea isn’t the answer

Liz Truss, favourite to become the UK’s next Prime Minister, is reportedly considering issuing as many as 130 new oil and gas drilling licences in the North Sea.

This is despite expert warnings that it will not significantly reduce energy prices, which are set internationally.

Unleashing a North Sea drilling frenzy isn’t a plan to help bill payers but a gift to the fossil fuel giants.

“Unleashing a North Sea drilling frenzy isn’t a plan to help bill payers but a gift to the fossil fuel giants already making billions from this crisis,” Doug Parr, Greenpeace UK’s chief scientist, said in response to the plan.

“New oil and gas could take a quarter of a century to pump out, will be eventually sold at global prices, and have no real impact on energy bills yet still fuel the climate crisis.”

Meanwhile, SSE Renewables says it is “focused on delivering the long-term solutions to today’s problems.”

Shetland calls on the UK government to intervene

In a national crisis that is marked by inequality, the UK has the biggest gap between energy costs for the richest and poorest as a proportion of income, new IMF analysis shows. Poor Shetlanders face the very sharpest edge.

“At the moment folk are finding that this is unfortunately becoming a difficult place to try and live,” says Irvine. As the UK’s remotest community, exporting many of its products, Shetland businesses already struggle to keep costs down to stay competitive.

And, he points out, unliveable energy bills will dissuade the workforce that is needed to develop the islands’ renewable energy industry.

Very simply, we’re looking for the playing field to be levelled.

“Very simply, we’re looking for the playing field to be levelled, so that the cost of living here is as close to the mainland cost as possible,” he adds. Orkney and other remote and rural parts of Scotland are also finding themselves in desperate situations.

Aside from advising people on energy efficiency, budgeting, and improving insulation, there is not much the Council can do, says Irvine. “We are pretty much dependent on the government to understand how they can solve this for us.”

SIC leader Emma Macdonald says, “We are calling for UK government support to enable host communities to secure long-term community benefit arrangements, which could include access to low-cost energy for islanders.

“But we also need immediate government help to address rising energy costs, which will have such a damaging impact on those who live in Shetland.”

With such a small (voting) population, Irvine fears that politicians won't be so incentivised to come to their aid. But the UK government insists it is aware of the pressures Shetlanders are under, pointing to a £37 billion (€42,900) package of support across the UK, including a £400 (€464) discount on energy bills over winter and £1,200 (€1,390) extra for the most vulnerable households.

“We also protect households and businesses in the North of Scotland, including Shetland, by providing around £90m (€104m) every year to reduce electricity distribution charges in that region,” a spokesperson told the Independent.

“This is on top of the extra £82 million (€95m) we provided to the Scottish Government to help vulnerable families across Scotland at their discretion.”