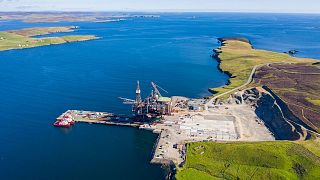 Shetland, a group of islands off the coast of Scotland, is doing what we should all be doing: working with not against nature. It is making the most of being the windiest place in the UK by using this natural resource to create energy.

The archipelago will soon have the most productive onshore wind farm in the country. Despite the Islands’ gusty credentials - racking up 14.6 knots on average - they currently rely on a diesel power station.

Europe’s energy crisis has driven home a number of geographic ironies for Shetlanders. Their fortunes have been boosted by the discovery of oil-rich seabeds in the surrounding North Sea and Atlantic since the 1970s, yet the population has one of the highest fuel poverty rates in Britain.

It is understandable that some want quick fixes, and expect to find them by drilling for more domestic fuel. But as a new report from UK think tank Green Alliance makes clear, squeezing the last drop of oil and gas from these dwindling reserves isn’t just disastrous for those on the frontlines of climate change - as this week’s IPCC report makes clear - it's bad economics.

Shetland is headed for net zero

With such extraordinary assets, this archipelago has the chance to rewrite its energy usage in a big way. Viking Energy’s 103 turbine wind farm, led by SSE Renewables, has been in the works for more than a decade. Once the long blades meet Shetland’s forceful currents on the central mainland in 2024, it will be the UK’s largest onshore site by output, with a 443MW capacity.

Wider events have caught up with things, and people now realise the imperative for Shetland to diversify.

“It leaves Shetland ahead of the curve in terms of the transition to net zero,” Aaron Priest, stakeholder manager for SSE tells Euronews Green. “Wider events have caught up with things, and people now realise the imperative for Shetland to diversify.”

Wider events, as Priest put it when we spoke in early February, have become even more pressing since Russia’s invasion of Ukraine. The need to wean ourselves off Russian gas - which accounts for more than a third of Europe’s supplies - has become clear, with leaders advancing both clean energy and alternative fossil reserves.

We are still too dependent on Russian gas. We have to strategically diversify our suppliers and massively invest in renewables.

But politicians are divided on how far to mine their own fossil fuels alongside ramping up renewables - which analysis shows yields far quicker gains.

With such abundant dirty and clean resources, Shetland - and other areas in the wind-battered, formidable North Sea - are of increasing importance for both the EU’s energy and climate security.

Aiming for a clean energy network and links to the mainland

The large Viking development in the centre of the mainland has catalysed a broader transition throughout the islands.

ORION - or, opportunity for renewable integration with offshore networks, for long - is a council-run project (alongside Highlands and Islands Enterprise (HIE), Scotland’s Net Zero Technology Centre, and the University of Strathclyde) which aims to create a clean energy network - from land to sea, renewable hubs to ill-fated fossil strongholds.

Crucially, an undersea cable will connect Shetland to the UK mainland for the first time, with a 600MW interconnector transferring Viking’s colossal wind power to the national grid.

“We are kind of at the heart of Europe even though we’re so far up north, with links to Norway, the European mainland and the Scottish mainland” says Harry Thomson, project manager in Shetland Islands Council’s (SIC) Future Energy team. It’s a bold claim, but the potential energy maps bear it out.

After almost 50 years of extracting and exporting oil and gas, Shetland has piles of infrastructure which can be repurposed.

If the council’s vision is realised, many of the pipelines, ports and tanker jetties that facilitated the siphoning of oil and gas for the last five decades will be filled with hydrogen. Green hydrogen, ideally - produced when water is split using renewable energy such as wind power.

Shetland’s electricity usage varies from around 12MW to 50MW, well below the capacity of Viking alone. And if the island’s other wind and tidal plans come to fruition in the next few years, it will have more wattage than the interconnector can handle.

Using an electrolyser to channel this surplus into hydrogen could decarbonise Shetland’s cars, buses and inter-island ferries. Its valuable marine sector is the glaring exception to this; loading a ferry that shuttles back and forth is one thing, explains Thomson, but you can’t just electrify a pelagic fishing boat that goes off for weeks at a time. The by-product of oxygen could be used in fish farming, however, completing one neat circle.

And ORION’s four architects have bigger dreams of exporting hydrogen at scale - via tanker to Rotterdam, and on to France and Germany where there is already significant demand for the fuel.

Alongside wind power, Shetland’s turbulent seas are already delivering. The first tidal array in the world (a technology with multiple turbines) was installed between the islands of Yell and Unst in 2016. Another first came last year when Nova Innovation created an electric vehicle charging point directly powered by the tide.

How will new renewables fit in with the existing energy structure?

“One thing about oil and gas, which we're trying to avoid with hydrogen, [is that] there's no refinery up in Shetland,” says Thomson. Oil is sent to the Scottish mainland before returning as a usable fuel. With hydrogen, “we're trying to produce it locally. And then it can come straight out the terminal, into somebody's car, hopefully at a more affordable price.”

Shetland Islands Council and other UK hydrogen investors are banking on the British government making it more affordable to produce through subsidies, such as launching a Contracts for Difference (CfD) round like it did for wind farms.

Remember: renewables are cheaper than gas.

So we are accelerating renewables with annual CfD auctions.

The more cheap, clean power we generate at home, the less exposed we’ll be to global gas markets.

Blue hydrogen - which is extracted from fossil gas and emits CO2 - is cheaper to make, and another key strand in ORION’s plan. Experts have warned the fuel could be even more polluting than gas, but the council believe there’s a place for it as carbon could be locked away in Shetland’s depleted oil and gas wells below sea.

Still tied to such a lucrative industry, it’s hardly surprising that Shetland’s green energy revolution is not the one dreamed of by climate campaigners; that ORION’s blueprint is caveated with compromises to Big Oil.

“Another thing we’re trying to do is not tread on oil and gas,” says Thomson. “We want to maximise the benefit to oil and gas, work them both in parallel, then obviously oil and gas will fade and we can ramp up the clean fuel route.”

Sullom Voe, an inlet of the North Sea at the tip of the mainland, hosting one of the largest oil terminals in Europe, is at the heart of this transition. The hub was sold by BP to ‘end-of-life’ specialists EnQuest in 2017, who are “completely onboard” with the clean energy project, says Thomson. The adjacent gas plant opened by TotalEnergies in 2016 is set on eking out more from the region, however.

Electrifying the plant and ageing offshore rigs with renewable energy may sound like a strange crossover, but SIC believes it's the best strategy for bringing the Islands’ major players together.

What does a just transition look like in Shetland?

Noone is better equipped than Shetlanders for making a green revolution work. External companies often come in with specialist needs, says Thomson. “They don’t expect that an island of this size has the capabilities, but it always seems to pull it out the bag.”

He puts this down to years of people branching out to do different jobs, leading to a wide pool of skills and knowledge.

It’s going to need a major effort to solve the Islands’ energy challenges - from the technicalities of floating wind farms in their fierce seas, to addressing the fishing industry’s concerns about these offshore sites. Some residents are also concerned about the scale of Viking, and its impact on Shetland’s wild landscape that draws tourists.

But there’s a moral imperative here too, as job opportunities slip away for the men and women who have worked hard in rough, dangerous conditions to help power Britain. Thomson, from the southernmost Fair Isle, says working on ORION has “opened my eyes to the fact that the just transition does apply to everybody.”

As well as keeping oil and gas workers employed, he extends this to securing a fair fuel price for all islanders, and making sure the money that developers are putting into Shetland benefits the wider community.

“Already a lot of my mates are asking me ‘can you get me a job creating hydrogen or something like that’,” says 25-year-old Thomson, who studied mechanical engineering at Glasgow University, before returning to Shetland when Covid struck. “And I say, we’re not doing that yet but I'll bear you in mind.”