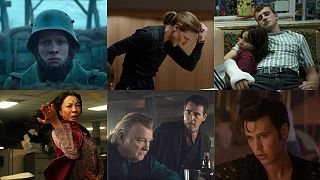 The British Academy of Film and Television Awards nominations are in, and there are some notable diversions from other mainstream awards ceremonies.

Edward Berger’s Netflix drama All Quiet on the Western Front, is this year’s BAFTA frontrunner with a total of 14 nominations.

The hard-hitting adaptation of Erich Maria Remarque’s classic 1928 First World War novel, about an idealistic German soldier sent to the trenches, is shortlisted for 14 prizes, including best film, director and adapted screenplay.

The number of nominations ties the German-US-UK co-production (in the German language) with Ang Lee’s 2000 film Crouching Tiger, Hidden Dragon as the film with the most nominations not in the English language. For reference, Richard Attenborough’s biopic Gandhi, starring Ben Kingsley, still tops the nominations chart with 16 noms in 1981.

The last non-English language film to win the BAFTA for best film was Alfonso Cuarón's Roma in 2019.

Check out Euronews Culture’s interview with All Quiet on the Western Front star Daniel Brühl.

The top nominees this year, following All Quiet on the Western Front are the deliriously bonkers and Critic’s Choice Awards-sweepingEverything Everywhere All At Once and the terrific black comedy The Banshees of Inisherin, which recently won the Golden Globe for Best Comedy or Musical – both tied with 10 noms; the music biopic Elvis with 9; stunning drama Tár featuring Cate Blanchett’s career-best performance with 5; and Aftersun, Top Gun: Maverick, The Whale, The Batman and Good Luck to You, Leo Grande each landing 4.

Other deviations and notable absences include the snub for Steven Spielberg’s autobiographical drama The Fabelmans, which received only one BAFTA nomination for original screenplay; nothing for awards-favourite Olivia Colman (Empire of Light); and no mention of James Cameron or Avatar: The Way of Water.

Such absences are partly due to the new methods BAFTA use to compile nominations, as part of a drive to ensure diversity following the #BaftasSoWhite controversy in 2020.

Indeed, some 120 rule changes were introduced, including gender parity at the long-listing stage and the director longlist was required to have an even split of male and female nominees.

The 76th edition of the BAFTAs will take place on 19 February at the Southbank Centre's Royal Festival Hall in London – not the traditional venue of the Royal Albert Hall. The ceremony will be hosted by actor Richard E Grant.

Outstanding debut by a British writer, director or producer

Best film not in the English language

EE Rising Star award (voted for by the public)