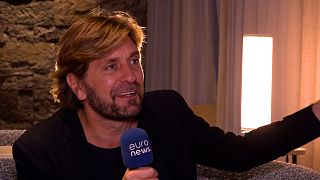 Ruben Östlund speaking to Euronews Culture before his sweep of the European Film Awards 2022   -   Copyright  Euronews
By David Mouriquand  •  Updated: 21/12/2022

Euronews Culture was in Iceland this month for the European Film Awards, which saw Swedish filmmaker Ruben Östlund smash all the competition and go home with the bulk of the awards for his hilarious eat-the-rich satire Triangle of Sadness.

Not that this was completely surprising.

Ever since its premiere in Cannes and its Palme d'Or win - Östlund's second in five years, following his win in 2017 for The Square - Triangle of Sadness has been scooping up accolades and rave reviews left, right and centre.

While the film has made our Top Films of 2022 list - in which my esteemed colleague shrewdly explored why Triangle of Sadness didn't work for him quite as much as Östlund's previous Palme d'Or winner - there's no denying its comedic chops and sharp satirical bite. And you can bet your bottom dollar that come next year's Oscars, this is already the frontrunner for Best International Feature Film.

We sat down with Ruben Östlund to talk about his banner year, the complexities of crafting satire in a modern world that seems to out-parody parody, the joys of Monty Python, and what his next film will say about modern human beings.

Euronews Culture: It’s been one hell of year for you, with your second Palme d’Or win in Cannes for 'Triangle of Sadness' and your multiple nominations at the European Film Awards (the interview took place prior to the ceremony, during which Östlund won four awards, including Best Film and Best Screenplay) – What changes, if anything, after such accolades?

But it’s a little bit like that – when we won the first one, then everybody expects you to be in competition again with Triangle of Sadness. It was a pressure in order to make it into competition – and when we made it into competition in Cannes, then I felt ‘OK, my work is done!’ And then when we were winning a second time, it was an absurd feeling in many ways. You couldn’t expect it at all. But now I feel free! (Laughs)

With regards to the European Film Awards, we’ve seen something of a broadening of the boundaries and horizons of what is considered European cinema, with international co-productions like 'Saint Omer' and 'Holy Spider' being nominated this year. What do you think about this widening of what it means to be “European cinema”?

I think it’s great! This year’s contenders are really good films, so it’s a tough competition. I definitely believe that it’s better for cinema if we don’t narrow it down and expression is in a specific style or way. You have to show the audience that there’s a big palette, a bit spectrum of expressions.

Considering that reality is often becoming borderline too satirical for satire, it’s almost as if satire has to redouble its efforts in order to be a credible commentary nowadays. As a filmmaker who skewers social contracts and hierarchies in society and culture, do you find it easier or harder to make satire?

Well, it’s interesting. In Triangle of Sadness, the first part is satirizing the fashion world and the beauty industry. And when I was writing the script for that part, I thought that I had tweaked quite a bit. But then it takes five years for a film to be released – it’s a long way from input to output when it comes to filmmaking. And the same year it was released, you could tell that the fashion shows and how the different fashion brands are marketing themselves was way much more absurd than I made it in my film. So yes, it can be hard to satirize our times.

I love the highlighting of absurdity!

I grew up on Monty Python and I imagine you did as well, considering one particular scene in your film is very reminiscent of a certain Mr Creosote sketch. Do you have a favourite Python sketch?

Oh, a lot of them have stuck with me! One that I remember and that my mother loves so much, and which made a big impact on me, is the sketch where they’re trying to sell a parrot that is dead…

Yes! (Laughs) I love the highlighting of absurdity! I also like Fawlty Towers with John Cleese. It’s not Monty Python but it’s the same tradition of humour. This also had a great impact on me. But there are so many of these sketches that you have in your back pocket if you’re born in the 70s and if you’re brought up during the 80s.

Have there been any particularly memorable reactions to 'Triangle of Sadness' that have stuck with you?

I have had one where I was screening the film in Paris and there was a French billionaire in the audience. I didn’t know it at the time, but when there was a Q&A afterwards, this man was standing up and was very upset. He started to shout: “It’s not so simple! It’s not so simple!” He was referring to the film in general. So, I asked him: “What is not so simple?” He replied: “If you don’t understand what I mean, I will not specify it!” It was an interesting reaction.

The other one that stood out for me, one which I was very happy about, was a press screening in Cannes. As a film critic yourself, you know that during press screenings, there’s often a lot of leaning back and chin stroking and not really participating in it. But there was one critic in the audience who stood up and screamed: “This is cinemaaaaaaa!” (Laughs) That one I was very proud of!

As great as it has been for 'Triangle of Sadness' with regards to critical reception and prizes, there’s been the tragic death of Charlbi Dean. Is that a particular memory of her that you treasure?

We shot the film during the pandemic, and the ensemble of the film, all the actors, were really working together. It was a very special shoot, and Charlbi was definitely one of the team players. She was not a diva at all – she was someone that helped her teammates to do a good performance. She was also lifting up the whole crew and the film team, because she was such a generous and warm person. And at the same time, she was performing on a very high level.

It’s just a tragedy, and I really hope that people will look on her performance and try to pay respect to her legacy because she’s definitely worth that.

Yes she is, and she gave such a brilliant performance as Yaya.

Yes. When I came back to Euboea Island in Greece where we shot the last part of the film – we were in a small village where we’d all spent seven weeks together, just us, the crew and some villagers – and I remembered this family feeling that there was during the shoot. It was a very special feeling that was created and Charlbi was a big part of that.

I have been interested in how we consume images in a digital world on small platforms for quite a long time, especially how we have become almost addicts to it.

Finally, your next film, if I’m not mistaken, is called ‘The Entertainment System is Down’…

Can you tell me a bit more about it? I know that it takes place on flight…

Well, I have been interested in how we consume images in a digital world on small platforms for quite a long time, especially how we have become almost addicts to it. And sometimes when you go on a flight, you can have quite interesting thoughts. Very often when I’m working on a script and I’ve been on a flight, I think: ‘Wow – I’ve got a really interesting thought now!’ And during these flights, I’m not connected to the WiFi. I wanted to go and investigate this a little bit more.

So the new film; The Entertainment System Is Down takes place on a long haul flight, and quite soon after takeoff, when everybody is starting to look at these screens that are in front of them on the seats, the passengers get the horrible news that the entertainment system is not working. So we have modern human beings doomed to a 15-hour long flight when the iPhone and iPads are charging out. Analogue boredom, and they have to socially interact like in the “old times”!

Madness! Exactly! (Laughs) It’s going to be very interesting to go into that. I’ve heard of some very interesting surveys that ask a test person to go into a room and do nothing. And the test person doesn’t know that the time limit of this experiment is only 15 minutes. But they said it was horrible! They felt it was torture! And then they added a feature to the experiment, which was that if they wanted to, they could push a button to give themselves an electrical shock.

Yes! And this electrical shock was painful but not harmful. And in order to break the status quo of just dealing with your own thoughts for 15 minutes, 40 per cent actually pushed the button to give themselves a painful electrical shock. I think this says something about us and our need to distract ourselves… So I’m going to look at modern human beings in this context!

Check out the video above for extracts of our interview with Ruben Östlund.