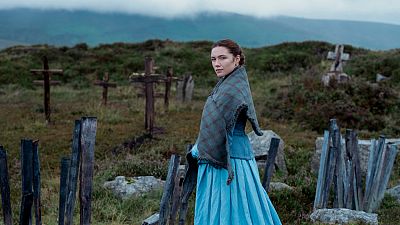 Chilean director Sebastián Lelio returns to the big screen after four years with The Wonder, an adaptation of Emma Donoghue’s novel of the same name. This captivating period drama transports the viewer to Ireland in the wake of the Great Famine, with a story that pits faith against science.

Set in a small, devout community, we follow Elizabeth “Lib” Wright (Florence Pugh), an English nurse who is hired by the village authorities to examine a unique case. A young girl, Anna O’Donnell (Kíla Lord Cassidy) has supposedly gone without food for four months. She is still, miraculously, alive, and showing no signs of starvation.

She says she lives on “Manna from Heaven.”

“How does that feel?” Elizabeth asks.

The village elders have all but canonized the 11-year-old, and visiting pilgrims refer to her as “a wonder.”

But some aren’t convinced. The skeptical nurse’s mission is to stay by the girl’s side for two weeks, rotating eight-hour shifts with a nun, Sister Michael (Josie Walker). After the fourteen days, they must each hand in their reports ascertaining whether the miraculous feat is the real deal or if Anna is a pawn in a larger game based on a lie that could turn divine into malign.

From the opening moments of The Wonder, you know you’re in for something special.

The film starts (and ends) in an industrial warehouse, filled with scaffolding and sets. A disembodied voice (Censor's Niamh Algar, who plays Anna’s sister Kitty) invites us into the story.

“This is the beginning of a film called The Wonder. The people you are about to meet, the characters, believe in their stories with complete devotion. We are nothing without stories, and so we invite you to believe in this one.”

The camera then glides across the room, before plunging into the period set where the story begins.

What follows this fourth-wall-breaking Brechtian device is a slow burn investigation, less a whodunnit and more a how-are-they-doing-it, with strong hints of Daphne du Maurier and elements of gothic horror that are teased in delightfully eerie ways.

The film flirts with horror and the supernatural without ever fully committing to it. While this teetering can be a nuisance in other films, the effect here is that you’re constantly kept on your toes. The director favours a humanist approach, one of his greatest strengths in his previous films (especially 2017’s A Fantastic Woman). Here, he injects a sense of otherworldliness to heighten the very human emotions and highlight the bone-deep sense of uncertainty that was felt by so many after the Great Famine.

Ari Wegner’s superb photography comes into play here. Her craft, which earned the cinematographer a well-deserved Oscar nomination for The Power of the Dog, captures the beauty and bleakness of the Irish Midlands, and brilliantly conspires with Matthew Herbert’s ominous score. Both the visuals and the soundscape seep into you and often make you feel like you’re drowning in isolation while hearing sounds that suggest bigger, more spiritual forces that may be at play.

This visual and auditory tension stresses the key to the narrative: the clash between science and religious belief. But don’t mistake The Wonder for the kind of film about the shortcomings of organized religion, in which an atheistic skeptic finds faith or lectures the foreign community on what’s right and wrong.

Lelio shrewdly toes the line between asking compelling theological questions - food for thought, if you will - and questioning religious agendas. It’s carefully and compassionately executed so that no one is vilified for their faith or outright celebrated for their “truths.” Like storytelling, faith is represented as both a tool for survival and potential destruction, and Lelio plays with this tantalizing dichotomy to better craft an engrossing psychodrama that reminds us of the power of stories.

Central to the power of Lelio’s film are the performances, specifically the double act between Pugh and Cassidy.

Once again, Pugh shows that no matter the project, whether she’s black widowing or not worrying darling, she’s incapable of giving a subpar performance. Her turn in The Wonder demonstrates what she can do with silence, injecting seemingly minor moments with palpable hints of questioned contempt and measured desperation hiding behind determination.

Elizabeth is the outsider and while summoned to the village, her scientific reasoning is inseparable from her nationality for the locals, one which represents England’s despicable role in the Great Famine. In their eyes, her dogged dedication to the truth, no matter how noble, could take away further hope from a country seeking to cling onto the most hope it can. Pugh excels when wrestling with this facet of her character, as well as her realizations when the true nature of her assignment is revealed.

As for newcomer Kíla Lord Cassidy, she is note-perfect, making Anna a relatable enigma.

The way Cassidy delicately allows moments of vulnerability to peek through (an act of?) pious composure is stunning, leading the audience to believe in her version of events while wondering whether she could be brainwashed. Or worse.

While the layered but cleverly economic script co-written by Lelio and Alice Birch (Lady Macbeth, Normal People) is terrific (and crucially doesn't spell out its reveal in one clumsy dollop), not everything works. The slow pace might put some viewers off, and the romance between Elizabeth and suspicious journalist Will Byrne (Tom Burke) doesn't satisfy. This element, ironically, feels rushed and, while necessary for the plot developments, is clumsily handled.

But the positives throughout far outweigh some minor niggles, and as we return to the framing device at the end of The Wonder, any fear that the fourth-wall-breaking bookends are a self-conscious gimmick is quickly put to bed.

Algar’s delivery of the line "It is a whole sorrowful world that is too hungry to see the wonder in every ordinary child" provokes goosebumps, and her ethereal “In, out, in, out” incantation crawls under your skin and sets up camp there.

It's an exquisitely poetic and haunting final beat that reveals the ending to be a revelation but not necessarily an optimistic one. It asks us to consider why we crave stories and the cloistered effect they can have on our lives, both in the sense of seclusion and protection. Lelio also alerts his viewer to the artifice behind the stories we’re told in both life and in the cinema. We walk into dark rooms to escape, to suspend our disbelief and surrender to another reality - only to walk out, having witnessed an illusion that keeps our eyes opened and hope alive in our 'real' world.

That’s the wonder at play in a film that has more than earned its title.

The Wonder is out now on Netlfix.