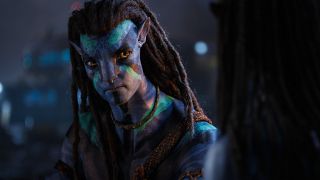 I see you, Avatar: The Way of Water.

I see you as the soulless sequel to the 2009 world-conquering box office behemoth that you are, an empty spectacle that is nothing more than a showboating exercise in CGI engineering and worldbuilding.

I see you for your undeniably impressive visual effects and your 48fps presentation you've blasted into my retinas, as well as the sheer audacity of James Cameron, who truly believes that society is anywhere near a place where literally anyone cares about Avatar sequels. Now, that’s impressive.

I see you as nothing more than the sprawling franchise elongation you are, a superfluous slab of technological wizardry that makes the whole film look and feel like the exploration of the advanced levels of a next-century video game.

I see you as the insanely expensive passion project that is a feast for the eyes but completely devoid of heart, revealing Cameron to be a master image-crafter but a godawful storyteller. Your gossamer-thin and disjointed narrative pivots on a revenge story that is stake-less, logistically baffling, and lacking in any form of emotional heft. But you weren’t interested in a compelling story, genuine emotion or even a puddle-deep environmental parable, were you? Your primary concern was coming up with an afterthought plot you could use an excuse to go from the first instalment’s forests to this sequel’s waters, in order to peddle a purely cosmetic spectacle yearning to be immersive. The irony is that without a decent story and meaningful characterization, your immaculate backdrop serves no purpose and ends up as shallow and unintentionally hilarious. As for those subtitles given to the whale-like “tulkun”, they are particularly funny, so thank you for that.

13 years in the making - for this? A reported $350 million budget, and no one was given enough cash to polish that atrocious dialogue and spike that ear-bleedingly naff voiceover? You repeatedly state that “the way of water has no beginning and no end.” The same could be said of your plotting.

Above all, I see you for the 192 minutes you have taken from me when I could have been watching two back-to-back helpings of Finding Nemo with my nephew. He’s the real victim here. As are the millions of audience members you’ll dupe into thinking that this insipid and bloated spectacle is what cinemagoing is all about. And to think there are plans for at least three more Avatar films…

I see you, Avatar: The Way of Water – and I wish I’d spent an evening being traditionally waterboarded.

Avatar: The Way of Water is out in cinemas now.