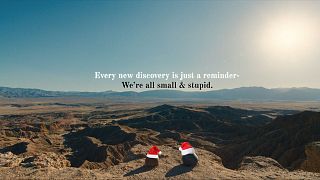 Day 19 of our Cultural Advent Calendar, in which we’re counting down our highlights of 2022 day-by-day all the way to Christmas and beyond. Our look at our favourite films of this year continues with Everything Everywhere All At Once.

There’s a scene in Everything Everywhere All at Once where one of the main characters bites into a chapstick, then proceeds to use a fanny pack (you know, those moon-shaped pouches belted around the waist) in an epic martial arts battle.

It was at this point, as my emotions rushed with adrenaline, that I knew for certain: fanny packs are cool.

But also: I’m madly in love with this movie.

Directed and written by Daniel Kwan and Daniel Scheinert, and produced by indie film gods A24, this multiverse masterpiece was a critical hit on the festival circuit, widely praised for its inventiveness - something that’s felt lacking in cinema for a long time.

The family’s relationships are strained in various ways. Waymond is shy and silly (he loves to put googly eyes on inanimate objects) but also feels ignored and unloved by an emotionally closed-off Evelyn, to the point he’s planning on serving her divorce papers.

Meanwhile, their twenty-something daughter is struggling to understand and accept herself as a lesbian woman, still untangling what that means alongside her cultural identity. Joy feels unrecognised by her mother in particular, who awkwardly bats away any attempts at more meaningful communication.

The film’s fantastical plot is unveiled during a trip to the IRS (Internal Revenue Service), when Evelyn is greeted by another version of Waymond - one from The Alphaverse. He’s cool and confident and can kick ass, all the while explaining to Evelyn that she must harness her newfound powers to battle demons from the multiverse and save the world.

It’s a lot to take in, especially when you’ve got a persnickety, turtle-neck wearing IRS inspector (Jamie Lee Curtis) attempting to talk taxes in the present universe (something that would be impossible to focus on in normal circumstances.)

While watching, I found myself feeling everything everywhere all at once. Well, maybe not everywhere, because that sounds a bit weird. But the absolute absurdity of it all set my feelings aflame; I’d go from laughing hysterically at the thought of a Hot Dog Hands Universe, to welling up a split second later over a chef’s relationship with a racoon that used to sit under his hat and guide his cooking by pulling on his hair (Raccacoonie <3).

The action sequences in particular gave me goosebumps, with a personal favourite being when Evelyn taps into the opera singing version of herself (skills include ‘increased lung capacity’ and ‘proud father’) to take on encroaching enemies; her every martial arts move matched to the push and pull of poetic music.

After spending countless hours of my life consuming content on streaming services and social media apps, most of which leaves no impression at all, it felt so special to see something that completely took me by surprise - and shifted my perception of the world for a while.

“In another life, I would have really liked just doing laundry and taxes with you,” says a CEO Waymond from the Movie Star Evelyn Universe. It’s one of the most heartbreaking scenes in the movie, and a reminder of the way we often take for granted the humdrum moments that make up the majority of our lives; always yearning for a more exciting, successful, glamorous version of ourselves.

That being said… After three years of “unprecedented events”, I’d quite like to be living in the universe where I’m just a rock with googly eyes. It seems peaceful there.