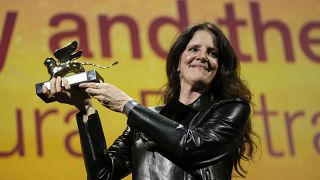 Laura Poitras wins the Golden Lion for her documentary All The Beauty And The Bloodshed   -   Copyright  Domenico Stinellis/Copyright 2022 The Associated Press. All rights reserved
By David Mouriquand  •  Updated: 12/09/2022

The oldest international film festival – and one of the most important, especially considering its proven track record for premiering future Oscar contenders – has come to a close.

The Competition jury of this 79th edition led by Julianne Moore has crowned Laura Poitras’ documentary All The Beauty And The Bloodshed as the winner of the coveted Golden Lion award for Best Film.

This is historic win for several reasons: not only is it only the second time in the festival’s 79-year history that a documentary wins the Golden Lion (following Italian director Gianfranco Rosi’s Sacro GRA, which won the Golden Lion nine years ago), but it’s the third time running that a female filmmaker wins the Golden Lion, after Chloé Zhao in 2020 for Nomadland and Audrey Diwan last year for the abortion drama Happening.

All The Beauty And The Bloodshed is the portrait of artist Nan Goldin and her campaign against the Sackler pharmaceutical dynasty, who was responsible for the opioid epidemic.

Poitras, an investigative journalist, previously won the Oscar for Best Documentary in 2015 for her blisteringly powerful Edward Snowden doc Citizenfour.

“This is for Nan,” stated Poitras when receiving the Golden Lion. “Monday is her birthday, so we’ll bring this to Nan.”

She also thanked the festival for recognizing that “documentary is cinema”.

Goldin is one of the world’s most important living American artists and a documentarian of the US’ LGBT+ history. Her story is a rich and complicated one and will doubtlessly be celebrated further as the fall season continues.

There is no release date for the film as of yet, but the film's distributor, Neon, has stated that the theatrical release would coincide with a retrospective of Goldin's work at the Moderna Museet, set to open 29 October. HBO Documentary Films recently acquired it for a television run.

Two other major winners this year are two films Euronews Culture flagged very early on as potential award winners: Bones And All and The Banshees Of Inisherin.

Italian director Luca Guadagnino (Call Me By Your Name, Suspiria) won the Silver Lion for Best Director for Bones And All.

He teamed up once again with Timothée Chalamet for the adaptation of Camille DeAngelis’ novel about a pair of drifters (Chalamet and Taylor Russel) who embark on a road trip and fall in love. The twist in this seemingly by-the-book coming-of-age drama? The two scamps more-than-dabble in cannibalism.

Guadagnino crafts some of the most sensorial cinematic journeys put to screen, and Bones And All is without a doubt one of the most anticipated indie titles of 2022. Audiences will be able to sink their teeth into this tender yet bloody love story about the intense impossibility of love in November.

Colin Farrell beat several frontrunners to take the Best Actor award for his performance in The Banshees Of Inisherin. He accepted his award via video link from Los Angeles. His director, Martin McDonagh won Best Screenplay for the Ireland-set drama.

Many thought that Brendan Fraser would win Best Actor for his celebrated big screen comeback in Darren Aronofsky’s The Whale, but the latter remains another frontrunner for acting prizes in the near future.

This is the second time Martin McDonagh wins the Best Screenplay award in Venice, following 2017’s Three Billboards Outside Ebbing, Missouri, which went on to win Best Film at the Oscars. Time will tell if his 2022 Venice win will also herald future Oscar wins.

The Banshees Of Inisherin sees him reunite with his In Bruges stars Colin Farrell and Brendan Gleeson for an absurdist tragicomedy set in 1920s western Ireland. They play two lifelong friends, Pádraic and Colm, whose relationship breaks down when one suddenly decides to cut off all ties with the other. The repercussions ripple across the small-town community and threaten to descend into violence.

This dark comedy about friendship shows off McDonagh’s knack for blurring comedy and tragedy and will be released on 21 October.

Cate Blanchett predictably won Best Actress for her towering performance as a classical conductor in Todd Field’s Tár, a win which kickstarts her Oscar campaign as frontrunner for best actress.

When accepting her award, Blanchett thanked Field, saying that he has “been absent from our screens for too long…and I’m glad you’re back.”

Indeed, Tár is Todd Field’s first film in 16 years - a Terrence Malick-sized absence after 2006’s Little Children. It is an account of renowned composer Lydia Tár, the first female chief conductor of a German orchestra. She is days away from recording her pivotal new piece, and trouble is looming.

The intensely unnerving drama is released in cinemas on 7 October.

Saint Omer is the narrative feature debut of Diop. In this nuanced and claustrophobic legal drama, Diop chronicles the trial of a Franco-Senegalese mother who committed infanticide. It’s an extraordinary film that is based on the real-life case of Fabienne Kabou, a French-Senegalese Philosophy student who killed her 15-month-old daughter by leaving her to drown on a beach in northern France.

As we noted in our preview of this year’s festival, No Bears was one of the most anticipated titles, especially after the imprisonment of its director, who was sentenced to six years in prison this year.

Venice's Artistic Director Alberto Barbera expressed the festival’s support for Iranian filmmakers persecuted in their country and his dismay at the incarceration “for no reason” of Jafar Panahi, Mohammad Rasoulof and Mostafa Al-Ahmad, directors who are “only guilty of using their right to freedom of expression”.

On July 12, Panahi was arrested in Tehran and slapped with a six-year prison sentence after he inquired about the arrests of fellow directors Mohammad Rasoulof and Mostafa Al-e Ahmad.

Moore held a sign emblazoned with Panahi’s face and the call to action: “Release Jafar Panahi!”

Panahi is no stranger to Venice, having won the Golden Lion for The Circle in 2000. His newest film is a political thriller that follows two parallel stories of love. His win serves to remind audiences how lucky they are to be watching the output of a voice that refuses to be silenced, even against Iran’s crackdown on free expression and peaceful dissidence.

While many expected the Marilyn Monroe biopic Blonde, The Whale or Florian Zeller’s _The Father_-follow up, The Son, to go home with some awards, the major loser this year is Netflix.

Still, we're not too worried for the streamer - Blonde comes out on 28 September, Bardo is released on 16 December, and White Noise hits the streaming platform on 30 December. All three remain highly anticipated titles and should rear their heads when it comes to awards nominations next year.

The full list of the Venice Film Festival 2022 Competition award winners can be found below – you can be sure that these are the films that everyone will be talking about in the second half of this year and which will dominate awards chat once the fall festival season is over: