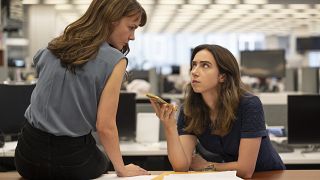 "Will you go on the record?"

Released in time for the five years of the #MeToo movement and International Day for the Elimination of Violence against Women, She Said sees director Maria Schrader (I’m Your Man, Unorthodox) adapt the 2019 nonfiction book by Jodi Kantor and Megan Twohey, the two Pulitzer Prize-winning New York Times investigative reporters who exposed Harvey Weinstein’s abuse and sexual misconduct against women.

It’s hard to think about journalism and investigation films without thinking about touchstones like All The President’s Men, Zodiac and Spotlight. There is something uniquely engaging and rousing about these based-on-fact movies that delve into the nitty gritty that prefaces truth being revealed and the powerful being held accountable.

She Said falls into this category, as a film about journalists and the investigation that brought down a predator. More than that, it tantalizingly goes full circle as a film incriminating Hollywood done by Hollywood.

It follows how Kantor (Zoe Kazan) and Twohey (Carey Mulligan) led their investigation, seeking out women who could be willing to speak on the record about the decades of sexual abuse at the hands of the Hollywood producer. The snag is that his payouts silence his survivors, who are bound either by non-disclosure agreements or the corroding effects of trauma.

Largely made up of meetings with editors and conversations with victims (which include stand-out turns by Samantha Morton and Jennifer Ehle, both playing former Miramax employee Zelda Perkins and Laura Madden respectively), She Said does an excellent job chronicling the hard facts of how the investigation proceeded. It shines when it portrays the three stages of anxiety regarding an investigation (Will I get the truth, can I prove it, and will it be published?), as well as when it focuses on the two dedicated women at the heart of the article - both exceptional journalists but also tired mothers who must muster the strength to keep going on. One subplot featuring post-partum depression is also very well handled, and buttresses the fact that life keep moving alongside work. This gives the characters' personal journey a believable weight.

Another feather in the film’s cap is that at no point does it topple into Oscar-bait territory or sensationalized melodrama; nor does Schrader and screenwriter Rebecca Lenkiewicz (Ida) use the material to crowbar in performative feminism as a marketing tool for a narrative that doesn’t need it. Both Carey Mulligan and Zoe Kazan are instrumental here, grounding the film with their performances; the filmmakers clearlu understand that the movie simply stands stronger as a sober investigation highlighting the compassion, legwork and long hours that went into bringing justice to those who had been silenced for too long.

However, whereas She Said benefits from what is undoubtedly a very pedestrian style (which is sometimes at odds with the stirring score by Nicholas Britell), it singularly faulters in moments that should have been excised to elevate the end result.

Some of the dialogue feels like overly explanatory declamations rather than natural speaking, and there are scenes in the final stretch featuring close ups over soaring strings and editors collectively huddled over their journos waiting for the article to be published that end up letting the film down. As for the final act appearance of the up-until-then unseen Weinstein and the interesting decision to have real-life figures play themselves, this strive for realism ultimately feels distracting.

In these cases, the engaging procedural aspect and the realistic depiction of journalism are sacrificed and replaced by stiff reenactment, leading to a conclusion that wavers between powerful and a bit too Hollywoodized.

These elements stand out for the worst and undermine flashes of greatness, like the arresting wordless prologue or the deeply eerie shots of hotel corridors superimposed with real-life audio recordings of Weinstein coercing his soon-to-be victims. Nothing quite equals these emotionally impactful moments.

When it comes down to it, nothing here comes close to what Kitty Green accomplished with 2019’s The Assistant, which remains the high bar in a genre that many have awkwardly labelled as “#MeToo movies”. Even if it is strongly emphasized in She Said that Weinstein is part of a system designed to silence victims and protect abusers by aiding and abetting, Green’s film managed to subtly (and claustrophobically) convey the entrenched nature of abuse and expose the supply chain machine far better than Schrader’s wider scope.

What She Said does succeed in being is a no-frills meta-commentary on Hollywood and a fitting tribute to the journalists who fought an against-all-odds battle and emerged victorious by telling a momentous story which allowed survivor’s voices to be heard.

That’s more than enough and hugely important. But unlike The Assistant, it doesn’t make it an essential viewing experience.

She Said is currently out in cinemas.

Euronews Culture's Film of the Week: 'Decision To Leave'