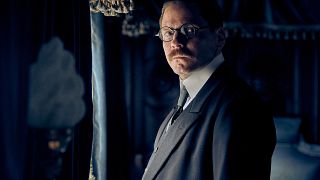 It’s a bright evening in Zurich, one of Europe’s most prosperous and beautiful cities, with the lake shimmering in the autumn sun. It’s a strange background to absorb a sombre message from one of the continent’s most successful actors.

Daniel Brühl is launching a new film adaptation of All Quiet on the Western Front, Erich Maria Remarque’s classic First World War novel. He says he thinks the values he grew up with are in danger.

The Barcelona-born actor is the star of German, Spanish and Hollywood productions including Good Bye Lenin, Rush, Captain America: Civil War and The King’s Man. He’s always a thoughtful and courteous interviewee, and with war on European soil again, he’s reflective of the parallels between continent of a century ago, and now.

Brühl, now aged 44, came to prominence in 2003’s Good Bye Lenin, the story of a young man trying to make his fragile mother believe that the Berlin Wall hadn’t fallen. In reality, the actor says, “I feel so privileged and so lucky about the time frame I grew up in. At that time, a wall in my country, in Berlin, was torn down and I grew up in a spirit of openness and curiosity."

“It felt like Europe was growing together and I took it for granted that it was a very solid fundament that would stand there forever and would not be as vulnerable as it is now. So certainly, things I took for granted are really in danger now, and it’s shocking and it’s bitter.”

"That why it’s important to tell these timeless stories, such as this one,” he adds.

All Quiet on the Western Front, written from the perspective of a German soldier, Paul, who is sent to the trenches as a naïve young recruit, was an immediate sensation on its publication in 1928 by Remarque, an ex-solider. The book is still one of the bestselling German novels of all time, selling 2.5 million copies within eighteen months of release, and translated into 22 languages. A Hollywood adaptation by Lewis Milestone picked up two Oscars in 1930 – for Best Picture and Best Director.

While this new German-language version, by Deutschland 83 filmmaker Edward Berger, has already been selected to represent Germany at next year’s Oscars, it’s not a remake of the original film.

But it would be wrong to say that Brühl in a pessimistic mood. He is, he says with a smile, “very excited and curious” to see the reaction from fans later, when the movie receives a big screen world premiere at the Zurich Film Festival. “I really think it’s a great movie.”

Viewers won’t find Brühl playing a soldier in the trenches that Berger meticulously re-created on set outside Prague. The part of Paul was given to a young Austrian stage actor, Felix Kammerer, and Brühl plays a character not in Remarque’s book - the moderate German politician and Vice Chancellor, Matthias Erzberger, who signed the Armistice on behalf of the German government.

Germans have a different history with war. So, to tell this story as an anti-war movie, never glorifying anything about war, was something that resonated with me.

The film pivots from the horror of the trenches where young men are dying, to the quiet of a train carriage in the forest of Compiègne, where the Armistice was signed in 1918, and where officers and politicians enjoyed every luxury.

“I read Erzberger’s biography and admired his political courage,” Brühl says. “We thought it was interesting to add this layer onto the film as it had such an impact on what happened afterwards in Germany."

“After several attempts on his life, Erzberger was murdered in 1921 and then he was used by Hitler afterwards as a scapegoat for Germany’s problems. I personally found him very bold and interesting, and although the scenes aren’t in the novel, it widens the scope of the film. And as an actor I found it interesting to have a parallel structure, leaving the trenches and going to the train. It’s a relief and an alleviation to escape the horror of the trenches for a moment, but it’s also supposed to be shocking - these men in their polished uniforms and shoes, eating croissants and drinking tea, and only one man, Erzberger, feverishly insisting on peace, while the others want to carry on with the war.”

The actor also argues it’s important for a modern generation to have a film adaptation of their bestselling novel in the German language.

“I got involved a few years ago when Malte Grunert, the producer of the film, called me, and he’d read a great new adaptation of ‘All Quiet’, but it was written in English,” he recalls. “He said, ‘we should do it in German’, and I said, ‘oh yeah, this has never been adapted in its original language, we definitely have to do this.’"

“This is the ultimate anti-war story, and film-wise, I’ve seen so many films with a different and equally legitimate approach, telling of heroic events in wars, or heroic things that soldiers have done in wars. I watched many of them growing up, and some of these films are masterpieces. But they’re American or British or French films."

“Growing up as a German, I found these to be outside perspectives, and as Germans, we have a different history with war. So, to tell this story as an anti-war movie, never glorifying anything about war, was something that resonated with me. Its tone is very bleak and very direct. No one wins in a war – even the winners, their lives are damaged as well and it’s well-captured in the film."

“In many ways, films about World War Two overshadowed everything that had happened before, but it’s important to see that the Nazis didn’t just arrive out of nowhere. That means in order to understand our history, you have to go further back, and you’ll be able to see that in this film there’s a clear view of what is coming down the line.”

Director Edward Berger, also in Zurich to launch the film, says he also hopes that that the near century-old words of Erich Maria Remarque will still resonate with new viewers.

He asserts that the story is “still shockingly relevant when looking at the current global situation."

"Russia’s war of aggression against Ukraine, growing nationalism, a resurgent right in France, Hungary and Sweden, the questioning of democratic structures that were once thought certain and have secured our co-existence and prosperity over the last 70 years – we see it all across countries in Europe and the US."

“If you look at Remarque's story of young high-school students who are enthusiastically drawn to the front in France and are immediately confronted with the horrific reality of war there then, yes, it’s a story rooted in the First World War, but it could easily be today.”

For that reason, Brühl says, he hopes this version will be shown in classroom lessons.

“There’s a huge potential there," he argues, “but also, I think it’s a very good movie, and I rarely say that – even with my debut film there’s something I would have done differently."

"In this case I’m really impressed by Edward and the cast. This was not an easy shoot at all. It was really challenging to make on so many levels, not just because you have to keep up with a literary masterpiece and a film classic, but it’s got a new approach and to me it’s one of the best war films out there. Or rather, a clearly anti-war film.”

All Quiet on the Western Front is available to watch on Netflix from 28 October 2022.

Euronews Culture's Film of the Week: 'Decision To Leave'