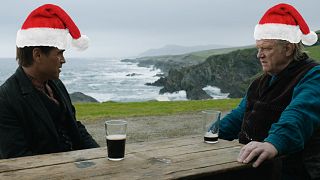 Day 17 of ourCultural Advent Calendar, in which we’re counting down our highlights of 2022 day-by-day all the way to Christmas and beyond. Our favourite films of the year list continues with The Banshees of Inisherin.

Somewhere in the middle of The Banshees of Inisherin is my favourite line of the whole film.

Pádraic (Colin Farrell) has finally had enough of the sudden silence of long-term pal Colm (Brendan Gleeson) and storms over to his house to demand an audience and his friendship.

He finds Colm sitting alone in his small house having just finished composing his fiddle masterwork 'The Banshees of Inisherin'. Before he has the chance to explode his earned tirade against Colm’s imposed silence, Colm’s dog starts incessantly licking Pádraic’s hand.

“I didn't come here for licks, I came here for the opposite of licks,” Pádraic says to both the dog and Colm.

For my money, it’s the line that sums up the entire film.

In it is Pádraic’s engagement with animals at the same level as human companions. It’s got Pádraic’s genuine hurt from his enforced estrangement. And chiefly, it’s also a very silly line delivered with the absolutely sincere silliness of Farrell’s performance.

Banshees covers multiple themes from artistry and depression to the Irish Civil War. But the part that struck me most about it was its focus on loneliness. Every one of the film’s characters are isolated from others in some way.

There is, of course, the principle isolation of the film. Colm tells Pádraic he doesn’t want to be his friend no more after they’ve spent however many decades whiling away the hours over warm stout in the pub.

The separation puts Pádraic in agony. He can’t compute why he has been torn asunder from a friendship he valued with such immediate force. Pádraic’s journey is the driving force of Banshees, and Farrell is constantly brilliant at displaying the petty angers for being spurned.

Every image, every line, and every action communicates the language of isolation so beautifully. From the empty Irish landscape to the stilted humorous patter and finally to Colm’s near inexplicable self-mutilation - everything comes together for a fascinating portrait of different archetypes of isolation. What’s most impressive is how writer and director Martin McDonagh’s script weaves humour throughout.

Outside of Pádraic’s hurt, I loved the ways Banshees focuses on the tiny details of loneliness. Many pieces about the film have focused on Colm’s devotion to his art and the importance he puts on his own need to struggle.

But it was the way Gleeson depicts Colm’s dual need to be left alone in quiet self-serious solemnity all the while his face is flecked with the inflections of missing true company. It’s all in the detail of Gleeson’s incredible expressiveness and speaks to his legendary actor status.

Then there’s Dominic (Barry Keoghan). At first glance, his character is the parable of the village idiot. And that’s very much a part of the role Dominic plays in the film. That’s far from all though. In Dominic, there’s a haunting portrayal of the village idiot as a man who has recognised the role he plays in a community with a painful contemplation that speaks to an intelligence and isolation far deeper than other characters give credit for.

Then finally, there’s the stunning performance from Kerry Condon as Siobhán, Pádraic’s sister. The only person capable to see a world past the film’s small island off the coast of Ireland. Her departure from the fairytale setting of Siobhán and Pádraic’s shared bedroom is haunting as she leaves behind the loving comfort of a stifling family home.

Like all of McDonagh’s work (In Bruges, Three Billboards Outside Ebbing, Missouri), the darkness is always counterpointed by the sharpness of his wit. Across his many brilliant plays and films, McDonagh has never shied away from gruesome violence to visually show the decrepitude inside his characters. In Banshees, he finds a new high by digging deeper into his characters than ever before while keeping the violence at a comparative low. It’s his most cutting film yet.