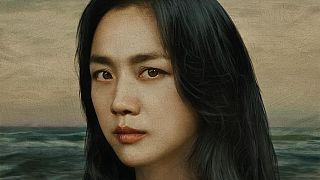 Got a Hitchcockian itch to scratch?

Look no further than Park Chan-wook’s Decision To Leave, which won the South Korean director the Best Director prize at Cannes this year, and could very well be one of his finest films.

This procedural thriller follows a Busan police detective, Hae-joon (Park Hae-il), as he investigates the suspicious death of a wealthy man. The stiff, Ki Do-soo (Yoo Seung-mok), was avid climber, and is found at the foot of a mountain. All the clues seem to point towards murder most foul, with the man’s beautiful and enigmatic widow Seo-rae (Teng Wei) being the prime suspect. However, as the hot shot sleuth questions the entrancing would-be femme fatale, he becomes increasingly fixated. Does her alibi really clear her, or is he being manipulated by a talented emotional mimic?

Whichever one it is, a dangerous bond is formed.

From that plot skinny alone, you could be forgiven for thinking that Basic Instinct is going to be given the Park treatment. Best temper those expectations.

As for those looking for hard-hitting Park excesses like _Oldboy_’s breathless corridor brawl or _The Handmaiden_’s titillating brand of sadism, be wary, as Decision To Leave is a dialed-down affair that has more in common with the director's very underrated Stoker than some of his previous works.

Park crafts a labyrinthine gem of great visual beauty which not only tips its hat to Vertigo and all the classic noir archetypes (a big city gumshoe tasked with solving a murder involving a widow with a secret that makes him question his marriage and instincts) but thrillingly revitalizes the genre by making it at its core an achingly romantic love story.

The editing is precision tooled and the audacious camerawork works wonders in the way it draws you into the story and the characters’ psyches. Park also infuses his whodunnit with a form of lyrical suspense that makes this murder-mystery that completely intoxicates you with its knotty twists and turns.

Indeed, Decision To Leave requires focus. The intertwining plotlines demand your full attention, and the phone-heavy details inherent to the narrative (apps, texts and recordings are integral to the story) at times give the already elaborate plot extra dizzying layers. Stick with it though and you’ll be rewarded with a sophisticated tale of ill-fated longing whose themes of experiencing impossible love and wrestling with lost connections will resonate with you long after the credits have rolled.

As for the climax, if you find yourself as floored and spellbound by another film’s ending this year, we’ll be surprised.

Daniel Brühl: "No one wins in a war – even the winners”