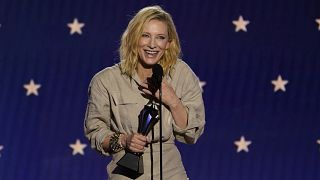 The critics have spoken.

The 28th annual Critics Choice Awards, which were held on Sunday 15 January at the The Fairmont Century Plaza Hotel in Los Angeles, unveiled their favourite film and television picks for 2022.

Everything Everywhere All At Once led the nominations with 14 nods and went home with five trophies, including Best Director for Daniel Kwan and Daniel Scheinert, Best Supporting Actor for Ke Huy Quan – who continues his well-earned awards season dominance in the category – and the top award of the night, the Best Picture award.

This confirms once again the film’s status as one of the most beloved movies of the season and one of the frontrunners for the Oscars in March.

These distinctions seem like the beginning of a blueprint for the upcoming Oscars, with one caveat: Everything Everywhere All At Once will face tough competition from The Banshees of Inisherin – which won Best Motion Picture Comedy or Musical at the Golden Globes – and Steven Spielberg’s autobiographical family drama The Fabelmans, which also won big at last week’s Golden Globes by taking the Best Motion Picture Drama award.

On the TV side, Breaking Bad prequel Better Call Saul won Best Drama Series for its sixth and final season, and its star Bob Odenkirk won Best Actor in a Drama.

ABC’s Abbott Elementary, which scored the most nominations with a total of six, followed its Golden Globe win with the Critics Choice Award for Best Comedy Series, while both Zendaya and Jeremy Allen White also added an extra trophy to their ever-growing awards chest following their Globe wins with, respectively, Best Actress for Euphoria and Best Actor for The Bear.

Jean Smart could not pick up her Best Actress in a Comedy Series for Hacks because of Covid, and several other stars could not make it to the Critics Choice because of positive Covid tests. Jamie Lee Curtis, Colin Farrell and Brendan Gleeson were all absent for the big night.

At the end of the evening, A24 and HBO/HBO Max topped all networks and distributors with six trophies each, followed by Netflix with five. Disney and AMC got three each.

Here are the winners of the 28th annual Critics Choice Awards:

BEST PICTURE: Everything Everywhere All at Once

BEST DIRECTOR: Daniel Kwan, Daniel Scheinert – Everything Everywhere All at Once

BEST SUPPORTING ACTOR: Ke Huy Quan – Everything Everywhere All at Once

BEST ORIGINAL SCREENPLAY: Daniel Kwan, Daniel Scheinert – Everything Everywhere All at Once

BEST EDITING: Paul Rogers – Everything Everywhere All at Once

BEST MOVIE MADE FOR TELEVISION: Weird: The Al Yankovic Story (The Roku Channel)

BEST ACTRESS IN A LIMITED SERIES OR MOVIE MADE FOR TELEVISION: Amanda Seyfried – The Dropout (Hulu)

BEST ACTOR IN A LIMITED SERIES OR MOVIE MADE FOR TELEVISION: Daniel Radcliffe – Weird: The Al Yankovic Story (The Roku Channel)