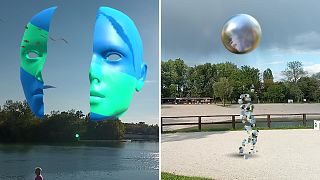 Imagine travelling to a city where all the tourist offers are available on an app and in your native language. Where you don’t need to queue for galleries because installations can be conjured up using your smartphone. Or where virtual reality (VR) reconstructions of historical events breathe life into heritage sites.

Two years of pandemic-related travel restrictions changed the way we experience the world. Virtual tours helped us explore destinations from the comfort of our couches, and business travel waned as video calls took over.

Now borders have reopened, countries are capitalising on this technology to attract tourists and enhance their experiences.

The term ‘smart city’ might make you think of robots walking the streets, flying cars crossing the skies or artificial intelligence controlling public services. The reality is slightly different, but no less exciting.

Being a smart city means standing out in accessibility, sustainability, digitalisation, creativity and protection of cultural heritage.

Denmark’s capital led the way on this even before the pandemic. The Copenhagen Visitor Service invites tourists to plan their itineraries with the help of touch screen guides, robotics and VR goggles, while an app disseminates information and collects data to help improve the service.

Hoping to join these ranks, destinations like Zagreb in Croatia and Paphos in Cyprus spare no effort. They are using technologies such as augmented reality (AR) to create virtual experiences that are usually reserved for the gaming industry.

These initiatives have seen both cities shortlisted for the 2023 European Capital of Smart Tourism, a competition that recognises outstanding achievements by European cities as tourism destinations.

Last month, the Zagreb Tourist Board teamed up with technology company Equinox to turn the capital of Croatia into a giant virtual art exhibition, dubbed Art Future.

Visitors were invited to download the Equinox XR app on their phones. Once they reached the location of a particular ‘installation’, they could open their camera on the app and the artwork was overlaid in AR - a familiar experience for any Pokémon GO players out there.

“Augmented reality is a technology that enables people to experience virtual content, embedded in the real world which surrounds them," explains Ivan Voras, founder of Equinox and technical director of the exhibition.

"This can be achieved through special hardware like glasses, but it's much more efficient and reaches a wider audience currently to do it through mobile phones.”

Nineteen contemporary artists, animators and 3D modellers from around the world displayed their ‘locative art’ - virtual art in real-life locations - at Art Future.

“Visitors and residents [could] view artwork created by major international artists in almost every square or park across the city,” says Ivan. Themes covered the polarising world of NFTs, the healing power of art, and conceptual solutions to global warming.

This was not the first time Equinox teamed up with the Zagreb Tourist Board for a future-forward exhibition. At Christmas, they placed animated and interactive gift boxes around the city for people to find.

Both projects created digital exhibits firmly rooted in the real world - and demonstrated how tech can be used to enhance tourist attractions without the need for major infrastructure.

Paphos brings its mythical heritage sites to life through your smartphone

Paphos in southwest Cyprus is a popular tourist destination. The coastal city is known as the legendary birthplace of Aphrodite, and its ancient remains have earned it UNESCO World Heritage Site status.

Leveraging the city’s mythical past in futuristic fashion, the Paphos tourism board has developed an app that allows users to bring its fabled history to life.

The Aphrodite’s Birthplace app interacts with three different scenes of the myth.

"By pointing your device to various locations on the beach, the app allows you to experience an animated Aphrodite in a real-world environment,” explains Nasos Hadjigeorgiou, head of the Paphos regional board of tourism.

Users can view Aphrodite rising from the waves as she is born or spy her relaxing on the beach in augmented reality.

"The main reason for us to use AR is to convert the intangible part of the experience into tangible, providing digital information and interaction in a real-world environment," says Nasos.

Soon, culture lovers interested in learning more about Aphrodite's myth will have a new tool at their service.

"We are in the final stage of developing a complete app about the myth of Aphrodite. This will include information and places that are connected with the Goddess's birth and life," says Nasos.

Besides this new app, the Paphos tourism board has big plans for its smart tourism project.

"We are also investing heavily in smart signs, converting static signs to interactive [ones],” says Nasos. This will bring 360-degree tours, audio guides in several languages, videos and photos to visitors’ fingertips.

What can travellers expect from smart destinations in the future?

As the tourism sector continues to embrace technology, smart destinations are likely to become the norm.

This can materialise in thousands of ways, creating smoother, more memorable and personalised experiences for tourists.

Museums will become more interactive, landmarks could be digitally overlaid with historical photos and information, and tourists might be able to see how busy attractions are in real time so they can plan their visits accordingly.

Tourism boards will leverage technology in ever more creative ways, blurring the lines between the digital and physical worlds. For example, Visit Sweden recently launched ‘Spellbound by Sweden’, a folklore-filled audiobook whose ending can only be heard when you are physically present in a Swedish forest.

There is still a huge gap to overcome between traditional destinations and the smart cities we want to visit. But the advancements we are seeing in tourism already give us a taste of what travel will be in the future.