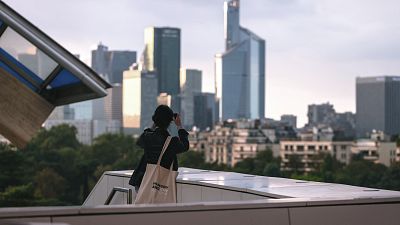 Travelling through Europe can sometimes seem like ticking boxes on an endless list of 'must-see' sites and travel guide recommendations.

The pressure to see everything properly becomes even more stressful when faced with a limited weekend stay, or just a few hours in one city.

With so much incredible art to explore and history to learn, it can be difficult to feel that all art and history is entirely represented in the most famous spaces. It's particularly pressing when entry to these spaces can leave you fighting through huge crowds or baulking at ticket prices.

Instead of succumbing to the pressure to do it all, it's far better to settle for doing something new, and out of the ordinary. Be it finding a hidden gem tucked away on a street corner or venturing to a space that satisfies your niche interest in cultural phenomenon.

The world wars are something that many budding historians will have poured over in history books and lectures alike. However, the story of the Dutch Resistance Movement in World War II is one which is often overlooked and underappreciated.

This captivating museum, situated in the Plantage neighbourhood of Amsterdam, takes you on an informative and emotional journey, uncovering the efforts of everyday Dutch resistance fighters.

In thoughtful, considered exhibitions, the Museum explores the various forms the resistance took against German occupation. From small acts of public rebellion, such as displaying postage stamps with the Queen’s face, to the artworks distributed as anti-German propaganda, the museum is a treasure trove of truly remarkable stories of resistance.

For the heartbroken: The Museum of Broken Relationships, Zagreb

In reflecting on our lives, and the relationships in it, it is very rare that we ever gain insight into what others truly feel, and the painful, private moments we all endure.

Enter: the Museum of Broken Relationships, in Zagreb, Croatia. Acting as both a physical and online space, the Museum seeks to relish in the pain and joy which can be found in past relationships, displacing mementos with personal, anonymous stories of heartbreak.

Rather than letting visitors wallow in self pity, the project is designed to dispel emotional collapse through creativity. Although, if it all gets a bit too much, visitors can seek out comfort food in the ‘Brokenships Bistro’, which provides a seasonally crafted menu with local, organic ingredients.

If you want to experience the Museum of Broken Relationships from home, you can take a look at their online collection, which includes some rather strange reminders from past lovers.

For the architecture nerd: the Louis Vuitton Foundation, Paris

Designed by the legendary Frank Gehry, the Louis Vuitton Foundation should be on every architecture nerd’s bucket list of buildings.

In creating the Foundation, Gehry was determined to create a space which pushed the boundaries of what architecture could be. Inspired by the lightness of 19th century French glass architecture, and the clouds over the Jardin d’Acclimatation in Paris, the Foundation is a daring homage to Gehry’s vision.

Using 3,600 panels of curved glass, as well as 19,000 panels of reinforced concrete, the structure provides the perfect balance of light and form for the exhibitions it houses, creating a visually stunning experience throughout the Foundation.

A true hidden gem of the fashion world, the Museo del Traje in Madrid is a space dedicated to the majestic beauty of styles and garments of the past.

From the historic to the contemporary, each exhibition at the Museo del Traje shows the vast cultural and social evolution of fashion throughout Spain and the modern world. From the 18th Century majismo movement to iconic 20th Century designers, such as Coco Chanel and Cristóbal Balenciaga, the museum takes visitors on a remarkable journey through fashion’s most daring moments.

For the artist: Hamburger Bahnhof, Berlin

Despite it’s misleading location, this converted train station-turned-museum houses some of the best art collections in Europe.

After a radical reconstruction, the 18th Century station re-opened in 1996, and has since been filled with the extravagant collection of Dr. Erich Marx, a famed Berlin collector. The collection features giants of the art world, including works by the King of Pop Art himself, Andy Warhol, as well as the provocative German creative, Joseph Beuys.

The station was restored with the multimedia nature of contemporary art in mind, with the museum's exhibitions encompassing a wide range of art forms. From daring installation work by Nam June Paik, to experimental works by the famed Marchel Duchamp, there is something here for every art fan!

For the theologian: the Vatican museums, Rome

High vaulted ceilings, intricately crafted tapestries and masterful renaissance paintings of iconic religious scenes, the Vatican Museums are every theologian’s dream. Although a fairly well-known site, the Vatican museums are host to many hidden gems, which often go unvisited.

Surprises in the collection include the aesthetic wonders found in the Gregorian Egyptian Museum, a vast realm dedicated to discoveries in Egyptology, as well as the sacred religious scriptures found in the Jewish Lapidarium.

If the Vatican museums aren’t within reach right now, you can view all seven sites in 360 degree view from the comfort of your computer, via their much-praised virtual tours.

13 of the world's most Instagrammable waterfalls