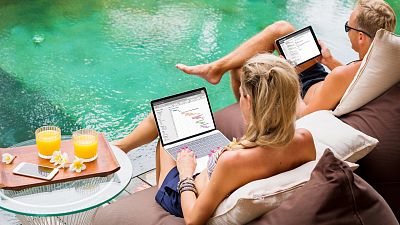 "I felt like I couldn't do certain things that others around me seemed to do effortlessly."

Travelling, on the other hand, came easily to her. She has been a digital nomad for over 12 years, living and working in 58 countries.

It wasn't until COVID-19 lockdowns provided ample time for self-reflection that she realised she might have ADHD and sought a diagnosis.

"Suddenly, my world and experiences to date began to make sense. It was very freeing!"

Hannah quickly realised that she was far from the only person in her location-independent community to be neurodivergent.

"When I meet someone, I often get this feeling of 'Hey, you're like me!'" she says.

Why does the digital nomad lifestyle attract neurodivergency?

I have had a similar experience since I became a digital nomad. I have ADHD, and for the first time in my life, I feel like I am a part of a neurodivergent majority. Many of my nomad friends have been diagnosed with ADHD, and others with autism. Plenty more report having the symptoms without a formal diagnosis.

"This lifestyle attracts people who don't fit in the box that society has prescribed," says Kit Whelan, who has been a nomad for over a decade.

"It draws in all sorts of people who go against the norms, and that includes neurodivergent folks."

Before the pandemic, Kit moved around every three to six weeks.

"It was so refreshing. So invigorating."

Once she had been diagnosed with ADHD, she realised that "the change and the stimulation were what kept my brain feeling like it was working at its best."

"There are always new people, or new places, or something else new to excite you. And that makes it easier to get through the more mundane parts of running a business," says Kit.

For Hannah, being surrounded by an understanding community is also a significant advantage of being a digital nomad. "Having friends all over the world who implicitly 'get you' is highly rewarding," she says.

The term neurodivergent broadly describes people whose brains function differently from what society considers as ‘typical’. It can include neurological or developmental conditions such as ADHD (attention-deficit/hyperactivity disorder), dyslexia and autism spectrum disorder (ASD).

People with ADHD may experience difficulty concentrating, forgetfulness and impulsivity, according to UK mental health charity Mind. This can impact behaviour, mood and thinking.

Nomadic living acts as ‘self medication’ for people with ADHD

Psychologist Sonia Jaeger specialises in internationally mobile patients, from nomads to expats, and she remarks on the high rates of neurodivergence in these communities.

"In a way, nomadic living is like a positive incarnation of ADHD traits, such as impulsive decisions and risky behaviour," she says. "You have constant adventure and new things happening all the time."

She suggests that many people start travelling and looking for new experiences, then realise that maybe they are using it as "self-medication" and seek a diagnosis.

People whose minds work in an atypical way often struggle to fit into a "normal" lifestyle, with a 9-to-5 office job and sedentary social life.

Digital nomadism appears to be providing an alternative which neurodivergent individuals can adapt to their needs, says Jaeger.

In fact, one of the great things about the nomadic lifestyle is that there is no one-size-fits-all.

"It is usually more flexible than sedentary life. It can be more adapted to your needs, which is a good thing no matter what kind of mental health issue you might have".

Rather than being forced to adapt to a structure that was not built with neurodivergence in mind, life on the road offers endless ways to adapt your environment and work schedule to your needs and preferences.

It's a neurodivergent dream to have all these options.

As Jaeger says, "It's a neurodivergent dream to have all these options."

There is currently no data on the rates of neurodivergence amongst digital nomads, but Kit is trying to change this. She has launched an online survey to understand this issue better.

"By looking deeper into the connection between the nomad community and the neurodivergent community, we can start to come up with ideas of how neurodivergent people can thrive," she says.