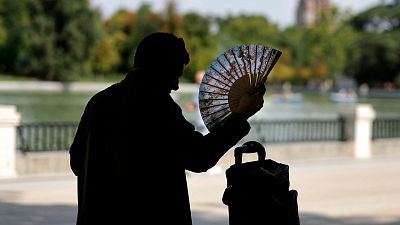 We can prevent excess deaths from heatwaves, experts claim - but only if we “urgently overhaul” how we deal with extreme weather.

Even as the days turn colder, it’s hard to forget the scorching summer that Europe just endured.

From drought-struck farmers to sweltering commuters, no one was immune to the heat. But for some, it was deadly.

In England and Wales, the heatwave caused 3,271 excess deaths - the highest toll since 2004.

The grim tally is a “scandal”, says Bob Ward, policy and communications director of the Grantham Research Institute on Climate Change and the Environment.

“Imagine if we'd had any other weather event, like a flood, that had killed more than 3,000 people,” he says.

So who is most at risk - and how can we protect people during heatwaves?

What does extreme heat do to the human body?

Heatwaves throw the body’s internal regulation systems out of kilter.

To cope with extreme heat, we sweat - but this leads to the loss of fluids and salts. High temperatures widen blood vessels, causing sudden drops in blood pressure.

After prolonged exposure to extreme heat, we lose the ability to perspire at all. Eventually, the brain shuts down. Older people are far more at risk, as are those with underlying health conditions.

“Heat can kill people very quickly, much quicker than the cold,” Ward says.

How do we stop people from dying in the heatwaves?

The UK government treats heatwaves like a health issue - issuing guidance for hospitals to prepare, and operating an alert system ahead of extreme weather.

“The sad fact is, most people who die (from the heat), die at home,” he explains. “Governments have neglected prevention.”

So how do we strike at the root cause of these unnecessary deaths? Here are four solutions.

“We need to really stop developers from building, for instance, anything with a single aspect that only has a set of windows on one side,” he says.

Buildings with windows facing one way - a common occurrence in flats - are much harder to ventilate.

Architects for new-builds must prioritise green architecture, says Paul de Zylva, a senior analyst at Friends of the Earth.

‘Passivehauses’ - passive houses, in English - can help us adapt to heat, as they maintain a near constant temperature with quality ventilation and insulation.

“Passivhaus standards reduce energy use and increase comfort and health,” he says.

For homes that have already been built, adaptation is key.

Installing shutters or blinds on the outside of a window is one way to beat the heat.

Ventilation is also crucial. You should keep windows and blinds shut during the day, but open them up at night and in the early morning to let the cooler air in.

Counterintuitively, forms of insulation can prevent your home from overheating.

Pipe insulation, for example, prevents heat from escaping piping, while fibreglass wall insulation traps heat and prevents it from transferring to colder spaces in the house.

Air-conditioning - which is bad for the planet and puts pressure on the power grid - should be a last resort, Ward says.

Paris, for example, is on average around 2 to 3 degrees Celsius warmer than surrounding rural areas. During heatwaves, this difference can climb to up to 10 degrees.

“(We should) also provide incentives for homeowners to restore front gardens lost to hard paving.”

Seemingly small adaptations can also have a huge impact.

“Things like painting the tops of buildings white, so they reflect the heat, can go a long way to making cities more liveable,” Ward says.

Last year, Athens appointed a Heat Risk officer. Every city in Europe should do the same, says Ward.

“Governments need to conduct a coordinated response,” he urges.

Part of the problem, Ward says, is our understanding of how to cool down.

“For example people are tempted, during the hottest times of the day, to throw open their windows and just hope that it will cool down.

“But actually, that just lets the hot air in.”

Education campaigns can combat these misunderstandings - and encourage community responsibility.

Communities have to learn to look after one another, checking in on vulnerable neighbours, and providing community cooling spaces.

“If you are relatively healthy, think about who might be around you, and if they might be particularly vulnerable to the heat,” Ward says.

“It can be a matter of life or death.”

Report: Europe hit with the largest rises in temperatures