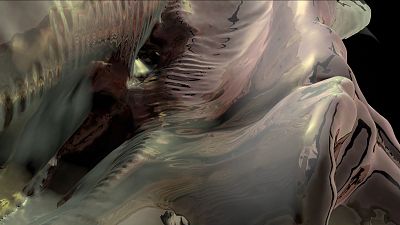 "The business model of dealers which is based fundamentally on discretionary spending and strongly dependent on travel and in-person contact has been uniquely positioned to struggle in the realities of the COVID-19 pandemic," it says.

Sales values dropped by 20% on aggregate in the dealer sector for 2020, and the first half of 2021 "has seen mixed results," the report details.

But the new kid on the block(chain) is not constrained by the physical world. Meet the much-vaunted NFT.

What are NFTs and what do they mean for the traditional art market?

Digital art is, by its very nature, reproducible. This facet is perhaps the best way to understand why the new format in art is so utterly polarised from anything that has gone before. Whether it's evolution or revolution, it has been the biggest disruptor in the art world for a generation.

"The traditional art market is based on rarity," explains Laetitia Maffei, co-founder of Danae.io - a platform designed specifically for the sale of digital art. Euronews spoke to Maffei at the Art Paris Art Fair.

"A new economic model has to be created in order to sell digital art because it is reproducible," Maffei continues. And her company's platform is an example of such a system, one that simplifies the method of trading digital assets.

NFT stands for Non-Fungible Token. NFT technology allows digital art to become part of the art market in the same way as traditional art. It allows authentication, monetisation and valuation of non-physical artworks.

To sell an NFT, you can go to a dedicated platform such as Maffei's Danae.io, but there are others such as Rarible and OpenSea. Once you have paid your fee (in cryptocurrency) you then upload your digital file. Once the NFT is on the platform, the creator is then free to sell it.

"It's a disruption because there is no materiality anymore," says Maffei.

NFTs use blockchain technology to authenticate digital objects such as music, text, videos, photos or drawings, each object or work is therefore unique. This authentication is carried out by a network of computers where, because it is a decentralised system, fraud is extremely difficult. Think of it as a digital ledger, where information about a piece of art (in this case) is permanently recorded. And because this ledger is hosted on different computers in different locations, it can't be interfered with easily, and if it is, the blockchain has all the data necessary to spot that something has gone rogue, and renders the changed information as illegitimate.

An announcement from the CEO of OpenSea on their blog on September 15 demonstrated, however, that foul play has not been completely eradicated from the system.

"Yesterday we learned that one of our employees purchased items that they knew were set to display on our front page before they appeared there publicly. This is incredibly disappointing. We want to be clear that this behavior does not represent our values as a team. We are taking this very seriously and are conducting an immediate and thorough third party review of this incident," wrote Devin Finzer.

OpenSea vowed to win back the trust of the marketplace and implemented new policies in order to prevent such actions in the future.

It's important to remember that NFTs aren't just about art.

For example, fans, collectors and fantasy players will be able to trade and play with the digital cards of all the football players in Spain's La Liga, generating a new revenue stream for the clubs and allowing buyers the opportunity to make money with the digital assets, thanks to a deal between the league and NFT sports platform, Sorare.

The cards' value is determined by the market's supply and demand, and ultimately by the players' performances and actions.

Sorare, a marketplace for digital cards from more than 180 football clubs and with more than 500,000 registered users, has an Antoine Griezmann (now back with Atlético Madrid) card which is valued at €95,498 euros. A far cry from Panini '86, where I could buy a pack of stickers for just a few pence - but they weren't unique, and that's the key factor here.

Barcelona defender Gerard Piqué took it to another level with a series of selfies that became NFTs.

Are NFTs just a fun game for the wealthy?

To some, these examples show the progress and variety of digital transactions, but for others it sounds distinctly ludicrous, dystopian even. With new concepts comes confusion and uncertainty, and it's too simple to lump in all NFTs together. LeBron James' dunk-fest is a set of NFTs, yes, but it's not the same thing as digital art, and conflating the two is a mistake.

"There is a difference between a 'moment' sold by LeBron James and a digital artwork. The first one is not art, it is a collectible. It will never be compared to a masterpiece," says Maffei. "However, a digital artwork made by artists such as Petra Cortright or Sara Ludy are already considered as part of art history."

But surely digital art is still a lot to get used to for most people, I ask Nima Sagharchi, Director of Middle Eastern, Islamic and South Asian Art at Bonhams International auctioneers.

"The funny thing is," he says, "you replace all of the elements people talk about surrounding NFTs with certain aspects of the contemporary art market and it's not that different. You could be equally shocked by the prices that so-called low-effort or conceptual art commands in the traditional art world. You only have to look at the duct-tape banana (a 2019 artwork by Maurizio Cattelan that consists of a banana duct-taped to a wall which sold in two editions for $120,000)."

"A lot of people are very cynical because it's digital, but if you're going to be cynical, be equal opportunities cynical. You can be cynical about the whole contemporary art market. There's no additional cynicism when it comes to NFTs because we've seen it all before. When it comes to the accusation that people are collecting them as trophy assets, you can say the same thing about the art market."

How disruptive will digital art sales be in the long term?

Commentators disagree, some ascribing the charge of 'fad', highlighting how it's just rich people having a laugh and pushing up prices for kicks, while others make the equally persuasive case that all the hallmarks of longevity are there: firstly, registered official ownership and, secondly, the element of scarcity, allowing for trading in exactly the same way as in the physical art market.

In nonfungible.com's 2021 Q2 report, the authors herald "the second age of NFT" thanks to the fact that "never before have NFTs, in all their forms, had so much visibility as in recent months." While this doesn't tell us specifically about digital art trends and is an overview of the whole NFT market, art represents a pretty healthy 14% of US-traded NFTs in Q2.

One of the many interesting aspects of this cultural phenomenon is the significance of the secondary market. Note the much larger figures in the graph above.

As a growing number of NFTs get minted, sold, and resold, and resold again (secondary markets track the journey of an artwork's sales and bid history) it continues to be good news for artists and collectors alike because, crucially, an artist’s right to royalties in the event of sales down the line, is actually guaranteed. All it takes is a line of code entered into the blockchain.

There are other possible royalties too - when someone buys a license or print version of an NFT - but currently, Danae.io is the only model that develops the use of artworks and pays royalties on that use to the owners. This royalties system is enabled and secured by the blockchain.

Sagharchi thinks that digital art can be as disruptive as people's ability to deal with it dictates.

"I'm pretty sure that people in galleries will be perturbed by the rise in digital sales, and some people at art fairs, people who don't see it as an opportunity, either because they don't feel like they can get involved or because they're overwhelmed by cynicism towards it," he says. "I can see how people might be seething that an 18-year-old artist is selling works at auction for hundreds of thousands, while objectively good mid-career artists can't break six figures. It's bound to cause some resentment. But it's a medium accessible to anyone so it's not shutting people out, and there's no such thing as NFT style. You could dig up Da Vinci, resuscitate him, and he could create NFTs in his own style. And he probably would."

At Art Paris, there is no digital art on show outside of the stand run by Maffei, who says it's largely because people don't know how to sell it, but it may also be a signal that it doesn't really need to be there at all.

"The NFT world is always on. It's 24 hours a day. It's centred in spaces that the traditional art world doesn't usually inhabit: Twitter, discord, the NFT platforms, and it doesn't switch off," says Sagharchi. "So if you're not switched on, you could miss the boat on NFTs."

Sagharchi has been a digital art enthusiast for some time, despite his more traditional art market leanings professionally. I ask him if it's incumbent upon Bonhams, Christie's, Sotheby's and other international players to future-proof themselves by getting into the game. Rather humbly, he admits that auction houses are not essential in the digital art world. "We're inherently shut out because all NFT transactions occur on the blockchain."

"There's a sense of interconnectedness that we can't offer yet, but what we do offer, which I think a lot of the NFT platforms are starved of, is a real-life experience," explains Sagharchi. "So if you're an up and coming artist, to build your market, to build credibility, to build a base, you need the NFT platforms, you don't need us. But if you've matured, to an extent, and you think you'd like a real-life experience, you want to access traditional art buyers, you want an event at a gallery, we can offer all that. Maybe one day the NFT platforms will do that, but it's not their business model right now."

Bonhams already partnered with Superare, in an auction entitled CryptOGs: The Pioneers of NFT Art, where Bonhams accepted payment in the cryptocurrency Ethereum.

"We have to partner with the NFT platforms because they're so tightly entwined with the artist's careers and they're the experts in how to deal with this stuff," says Sagharchi. "It's not at all adversarial. They were very happy to partner with us."

I share my Panini analogy. Sagharchi laughs, clearly no stranger to the seminal sticker album. "It's all Panini! Except no one can steal them from your locker."