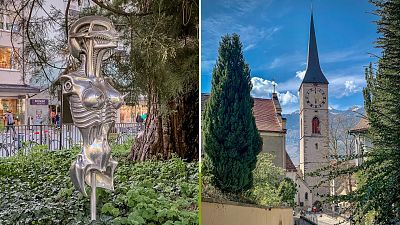 After visiting many of Switzerland’s big hitters over the years, I finally discovered that this off-the-radar spot is a destination in itself. Now the capital of the trilingual (German, Italian and Romansch) canton of Graubünden, Chur has a long and fascinating history.

Here's why this dinky 34,000-person Swiss city should be on your travel wish list.

On warm, sunny afternoons, residents socialise on old town patios, chugging frothy beers and sipping local wines. Since Chur is a hub for the Rhaetian Railway, there are of course tourists around, but it’s clear that life here does not revolve around them - and it never feels overcrowded.

Quaint as this may sound, Chur has an unexpectedly edgy side. The streets are licked in vibrant 3D illusions by local urban artist Fabian ‘Bane’ Florin. Head to the garden of the striking Graubünden Art Museum and you’ll be confronted with the original ‘Aliens’ sculpture from the 1979 Hollywood blockbuster. Its creator, Swiss artist H.R. Giger, was a Chur native.

Amazingly for such a miniature city, there are two art museums, two performing arts venues and six art galleries. With everything from fashion boutiques and department stores to patisseries and gourmet restaurants, there is no shortage of things to bust your holiday budget on.

Tracing back 5,000 years, picturesque Chur - pronounced ‘Kooor’ by the locals - is the oldest city in Switzerland.

In the car-free medieval old town, tall skinny buildings are wrapped in curlicued script and whimsical frescoes. For a prime example, check out the embellished facade of Café Zschale on Ober Gasse street.

Up a steep staircase above Museumplatz, the cathedral of Saint Mary of the Assumption, with its three naves and Romanesque stone carvings, has presided over the town for more than 800 years.

Over at the Bischöfliches Schloss - bishop’s castle - Austrian Baroque prevails. The current structure was erected for Bishop Joseph Benedict von Rost, who was in office between 1728 and 1754. Von Rost was originally from South Tyrol in northern Italy and brought his commune’s architectural style with him.

A five-minute walk away, the Bärenloch, or ‘Bear Hole’, is steeped in myths from the Middle Ages. Consisting of two intimate interior courtyards between Arcas Platz and Kirchgasse, this curious site is said by some to have held bears used in bear baiting. Whatever the origin of its name, the Bärenloch remains a good example of the cramped living quarters of late-medieval Chur.

Just down the street, Martinsplatz is home to a unique 1:500-scale bronze model of Chur’s historic centre. Located between the Gothic church of St. Martin’s and an elaborate fountain splashed in zodiac signs, the tactile model allows blind and visually impaired people to get a better sense of the old city through touch. The names of the most important buildings are written in both braille and Roman alphabet, making the model a useful tool for city tours.

Known in Roman times as Curia Raetorum, Chur was the centre of the Roman province of  Raetia. In the old town, you can scope out ruins from this era, including the remains of a Roman road station. Ornate shelters designed to reflect Roman edifices protect the ruins and archaeological sites while doubling as a museum.

To enter, head to the Chur Tourism information centre at the train station, where you can pick up a key to the museum for CHF 5 (€5).

Winter snowshoeing and summer hiking in the Alps

Billing itself ‘the Alpenstadt’, the Alpine City, Chur is the only city in Switzerland with its own winter and summer sports region. And with its convenient cableway to Brambrüesch Mountain, getting to the heart of the action could not be easier.

In winter, locals hop on the gondola to enjoy skiing, snowboarding and snowshoeing adventures. In spring and summer, it takes riders to the start point for hiking, mountain biking, and a chance to enjoy Alpine meadows blooming with wildflowers.

Hike Chur’s wine trail then fill up on Swiss delicacies

More into drinking than sports? Chur’s got you covered on that front too. Thanks to favourable climatic and geological conditions, Chur and the scenic Graubünden Rhine Valley are ideal for producing wine. The best way to sample it is on a tour of the 27km wine hiking trail, which connects Chur with the wine-growing communities in the Bündner Herrschaft.

Navigable by foot or bike, the trail offers three circular walks through the vineyards of Trimmis/Zizers (about 4km), Malans/Jenins (just under 10km) and Maienfeld/Fläsch (about 10km), with rest breaks at torkels, or wine cellars, and restaurants along the way.

Home to the highest concentration of restaurants and bars in Switzerland,

Graubünden’s capital is also a top choice for foodies. For local, seasonal Graubünden gastronomy and the region’s largest selection of wines, head to the cosy, wood-panelled Veltliner und Bündner Stuben zum Stern - an institution in Chur for over 300 years.

Once you’ve had your fill of barley soup, homegrown asparagus and veal washed down with homemade churer röteli (cherry liqueur), you can explore Chur’s Brazilian, Indian, Italian, Japanese, Mexican and Spanish restaurants.

Chur is the ideal compact city

Clean and friendly, Chur has a bit of everything. Roman ruins and a wonderfully preserved medieval town cater to history buffs. An abundance of restaurants, cafes and arts venues have the foodies and culture vultures covered. Vineyard hikes just outside the historical centre and easy access to nature and outdoor sports mean you can stay active during your trip.

All in all, this is the ideal compact city and it’s certainly worthy of attention. But perhaps not too much.