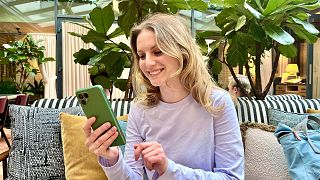 With the launch of the new iPhone 14 this week, many will be itching to upgrade their mobile.

It was the battery that was the final straw for me. I’d been carrying around a back-up for my old iPhone 5 for years; a source of stress given how much we depend on smartphones for rail tickets, cards, music, and everything else a day trip depends on.

My contract was up and the thought of getting the next shiny iPhone on the never-ending conveyor belt of obsolescence just felt too…frustrating.

The Fairphone had been on my radar for a little while. A sustainably sourced, stylish model that you can actually fix? Sign me up. The only catch, of course, was the price. €579 is no small amount to spend upfront.

But I took the plunge on the new Fairphone 4 last year and haven’t looked back - here’s why.

The joy of holding a responsibly sourced phone

The Fairphone seemed mystical at first, compounded by the tone of the EE employee who made it sound like part of a realm far, far beyond the high street. But I soon found all the info I needed on Fairphone’s website. And some useful analysis on the Ethical Consumer website too which spurred on my choice.

Fairphone tops the consumer organisation’s rankings by a long way - the only brand in its guide which “truly aims to put people and the environment before profit”.

The Dutch social enterprise actually began as a 2009 campaign around conflict minerals - precious, mined commodities used to finance armed groups. Only later did it branch out into phone production.

So it’s no surprise that it outshines other makes on the following categories:

Fairphone was the only company to receive the best rating in this category, which ensures that workers’ rights are upheld throughout the supply chain. As Ethical Consumer notes, this is especially important in the electronics sector where production is primarily based in countries like China, which lack strong workers’ rights legislation.

Apple was found to be producing iPhone 11s in 2019 at a Chinese plant with half the workforce made up of temporary workers and ‘interns’, many as young as 16.

By contrast, Apple was found to be producing iPhone 11s in 2019 at a Chinese plant with half the workforce made up of temporary workers and ‘interns’, many as young as 16.

The Amsterdam-based company also tops up the pay of its contract manufacturing workers to a living wage.

Fairphone has gone to unprecedented lengths to map out its suppliers, ensuring its phones are free of conflict minerals.

It is the first and only smartphone brand to integrate Fairtrade gold into its supply chain, and since 2017 has helped implement an anti-child labour project in Uganda.

The firm has also taken the unusual step of publicly disclosing a detailed list of its suppliers. A commitment to transparency which really should be the norm.

Despite what you’ve heard, it’s not a downgrade

It took just under three months for the Fairphone to arrive (as planned). It’s a novel experience for a capitalist consumer, having to wait.

But, as I reminded myself, that’s how it is when things are made to order, not sitting in Apple’s store cupboards waiting for nameless, yet inevitable, throngs of consumers. So long went by that I’d both cooled off about the purchase and written it off as a sunk cost.

My excitement soon flared up again when it arrived in early February of this year. Of course it was bound to feel like an upgrade from my ailing iPhone 5, but it turned out that I hadn’t made the ethical choice at the expense of functionality or style at all.

One small cause for concern was how good the camera would be. The dual 48-megapixel system on the back is a big improvement on the Fairphone 3, but I’d read enough message board reviews comparing it unfavourably with iPhones to have lowered my expectations.

It is a little less reliable - with a slight blue-purple tinge in lower-lit scenarios - but, unless your job is in photography or film direction, I would argue it’s perfectly up to the constant snapping most of us do.

The truth is smartphones already do far more than we need or can make use of; we don’t need endless improvements.

Everything else works perfectly slickly, and I love the speckled-y green backing of mine.

A phone that’s built to last

The big selling point for the environmentally-conscious consumer is that Fairphones are not destined to meet the mountain of e-waste we’re stacking up.

They have a five-year warranty, and phone owners can repair the phone themselves by using a screwdriver to replace its spare parts. A far cry from Apple’s sealed off devices.

And when it finally is the end of the road for your Fairphone, you can send it back to its maker where it’ll either get a new lease of life or be sent to a European recycling facility to recover the valuable resources inside.

Buying a Fairphone not only supports the ethical company, it sends a message to other mobile phone brands that we value sustainability.

If I’ve convinced you that the Fairphone is the one for you and you’re ready to chuck your iPhone or Samsung away - steady on.

To avoid adding to the planet’s e-waste woes, it’s best to see out your iPhone for the rest of its (probably short) lifespan.

There are also some cheaper, second-hand alternatives to the Fairphone. UK mobile network giffgaff runs a refurbished phones scheme where you can get your hands on an iPhone 8, for example, for just €143. So there’s really no need to buy the latest iPhone 14.