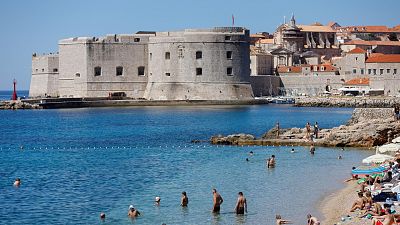 The European Union has given Croatia the green light to begin using the euro from next year.

The country will join 19 other EU member states that use the currency.

It will adopt the currency from 1 January 2023, making Croatia the latest nation to join the eurozone since Lithuania in 2015.

From next year, it will mean that just seven EU countries still use their own currency.

Why is Croatia adopting the euro?

Croatia will continue to use its own currency, the kuna, until January next year. Currently, one Croatian kuna is worth around €0.13.

In order to adopt the euro, a country has to fulfil a set of economic conditions including having a stable exchange rate and low inflation.

By adopting the euro, the eastern European nation hopes to gain more financial security and improve the living standards of its citizens.

Croatia will also benefit economically from closer financial links with the single currency area’s other members and the European Central Bank.

For visitors to Croatia from the eurozone, this will also mean no need to exchange money.

Which European countries still use their own currency?

As Croatia becomes the 20th EU nation to adopt the euro, there are still a number of members that haven’t taken this step.

In these countries, visitors from the eurozone still need to exchange money before they travel. Here’s a list of the currencies they use and some more information about these non-eurozone EU member states.

Denmark is the smallest of the Scandinavian countries but it is big on gourmet food, culture and design.

As the land of hygge, Denmark is the perfect place for a holiday focused on wellness. Travelling its vast coastline is a great way to unwind and recharge.

Visitors to Denmark will need to exchange their money for the Danish krone.

Experience the midnight sun and northern lights in Sweden

Sweden is a great destination for nature lovers with nearly 100,000 breathtaking lakes, rugged mountain ranges and swathes of forest.

It’s the perfect country to watch one of nature’s greatest spectacles, the northern lights, or stay up all night under the midnight sun.

Sweden uses the Swedish krona following a 2003 referendum where the public voted not to adopt the euro.

The country is also full of fascinating historical monuments from monasteries to fortresses.

Bulgaria currently uses the lev although it intends to switch to the euro when it fulfils the required conditions.

Romania combines some of the most impressive natural landscapes in Europe with quaint medieval villages and dramatic castles.

The Danube Delta is one of the best preserved on the continent and a paradise for birdwatchers while the spectacular Scărișoara Glacier is Europe’s second biggest underground glacier.

Romania uses the leu and, like Bulgaria, hopes to adopt the euro in the future.

Delve into Europe’s history in Poland

Poland is the perfect destination for history buffs with plenty of medieval castles.

You can also reflect on Europe’s World War II history at the Auschwitz-Birkenau Museum, Warsaw Uprising Museum and the POLIN Museum of the History of Polish Jews.

Visitors to the capital will also be impressed by the stylish bars and new vegan restaurants that have popping up in recent years.

Poland uses the zloty as its local currency.

Taste the local cuisine in Hungary

Hungary has a rich and hearty local cuisine with mouthwatering dishes like Goulash - a paprika-seasoned meat stew - and lángos, a deep fried flat bread.

The country is also renowned for its thermal baths of architectural splendour. Lake Héviz, the world’s largest thermal lake accessible to bathers, is also worth a visit.

Visitors to Hungary will need to exchange their money for the forint.

Czech Republic is the county of castles

With the highest density of castles in Europe, Czech Republic is a paradise for architecture and history lovers. Some of these ostentatious buildings date back to the 1300s and the capital city Prague is home to the world’s largest castle complex.

Visiting historic buildings is thirsty work, but luckily the country is also famed for its tradition of beer brewing that began as early as 993 AD.