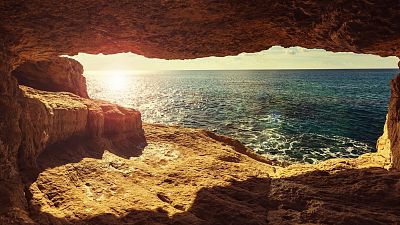 Born from the foam of the sea, the legendary lady has been (like all of us) a little washed out of late. Caught up in the pandemic's tiresome tangle of lockdowns and travel plans deferred, romantic getaways to Cyprus have been put on hold — but maybe not for much longer.

Cyprus is open for business (with some conditions)

If you've been cramped in a tiny European apartment for the past year and find yourself craving some of that bright Cyprus sunshine, can you visit?

Planning to visit Cyprus?
Here's all you need to know: https://t.co/3S9kNknu5hpic.twitter.com/HknG64BWfS

Well, it depends where you're coming from.

Right now, EU citizens are allowed to visit the Mediterranean island. The exact procedure depends on where your country of origin fits into Cyprus's traffic light system.

Malta, New Zealand, Iceland, and Australia, for example, are in the Green category, meaning travellers can enter the country without any restrictions.

If you're not lucky enough to be coming from here, don't worry, the Cypriot borders may not be closed to you. Countries in the Orange category can still enter but will have to produce a negative PCR test taken within 72-hours before departure. Right now, Ireland, Romania, China, and the UK are among the countries listed here.

Cypriot citizens and legal residents coming from somewhere on the orange list can opt to get a test on arrival instead. But, they will have to self-isolate while the test is being processed.

Travelling from a red-listed country is a little more complicated. If your country is in the Red category, you're required to produce two negative tests, one within 72-hours prior to departure and another on arrival. Passengers will have to self-isolate until the results of the second test come back.

Currently, Germany France, Italy, and Belgium are all in the Red zone. The countries are recategorised regularly and a fully updated list is available here.

No matter which category you're in, all travellers must still fill in a Cyprus Flight Pass before boarding flights to Cyprus - airlines have been made aware of this requirement and are obligated to enforce it.

I'm vaccinated, what do I need?

The Cypriot government has started to legislate for vaccinated travel. What exactly does this mean?

Firstly, no vaccinated tourists will have to self-isolate on arrival. However, you might have to produce a negative PCR test, depending on where you're coming from.

Travellers whose country of origin is in the Orange or Red zone will need a negative test taken within 72-hours before departure. Green category passengers will not.

If you're departing from a Red-listed country, you will also need to produce a negative PCR test on arrival to Cyprus, even if you've been vaccinated.

All passengers will still have to fill in the Cyprus Flight Pass before boarding.

Okay, I've made it to Cyprus. What are the best things to do?

Plan that island summer fling now. Cyprus has seen its share of coronavirus restrictions and it would be wrong to say these have had no impact—in fact, the Cyprus Mail reports that nearly a third of the bars and restaurants won't be able to re-open once pandemic regulations permit, and that's a lot. But that doesn't mean you shouldn't start your Cyprus trip planning now.

Kourion is more than just another archaeological site. It is a 3 era spread of history, embraced by a gorgeous stretch of beach of rugged and raw beauty with mesmerizing sunsets every day! Have you been? ?#visitcyprus#Kourion#Limassol
?@charalampos_kouloumis pic.twitter.com/JONAH05FCC

First-time visitors to the island should think about spending at least a couple of days in either Larnaca or Limassol, the main cities on the long southern coast. The rationale is to soak up some of the historical context and flavour of the island before you start slathering on the sunscreen.

Ancient ruins and mezze in Larnaca

Everywhere in Cyprus has ancient roots and bears the marks of the early civilisations and empires that swept in and out of what is, after all, the third biggest island in the Mediterranean.

Within Larnaca's city limits you can see the surprising ruins of Kition, an ancient city-kingdom with temple remains that date back to the 13th century BC, a seaside Byzantine castle with Ottoman inscriptions, and the legendary (and beautiful) Church of Saint Lazarus.

A fine array of restaurants and cafes beckon opposite the Finikoudes, a palm tree-lined promenade that straddles the sea.

For Lebanese food, Maqam Al-Sultan is a must (it's quite atmospheric, but they also do takeaway) and the seafood mezze, or small plates, shine at breezy tavernas like Militzis, Monte Carlo and Pyxida Seafront.

Visit the amphitheatre that used to adorn Cyprus' banknotes

Limassol is Cyprus's sophisticated port city flanked by archaeological treasures: on the eastern edge there are the windswept ruins of Amathus, one of the island's original 10 royal cities, while to the west you'll find Kourion with its ancient amphitheatre perched above the sea - so emblematic a Cypriot sight that it featured on the reverse side of the Cyprus five-pound note before the euro was adopted in 2008.

In Limassol itself, there's no shortage of fun stuff to do, from pottering about the old town with its medieval castle and gracious British colonial buildings to luxuriating under the sun around the long seaside promenade or posh Limassol Marina.

One of our favourite restaurants is the Karatello tavern, adjacent to the Carob Mill Museum and renowned for its contemporary Greek-Cypriot cuisine.

Holidaymakers of a certain age - and by that, I mean the millennial crowd and younger - may equate Cyprus with devil-may-care sojourns in any of the numerous beach resorts around Ayia Napa, way over on the southeast coast.

The beaches are indeed great, but the tourism season will take longer to wind up there because the classic beach escape is more primed for summer than spring. As we race headfirst into summer, we just hope the beaches are ready.

Luxury hotels and the Rock of Aphrodite in Paphos

My advice as a seasoned Cyprus aficionado? Do a 180 and, once you've had a serving of Larnaca and Limassol (each of which is frankly more fun than the landlocked capital of Nicosia) drive to Pafos (or Paphos, as it is sometimes called).

Along the way, you'll pass the spectacular Petra tou Romiou, the Rock of Aphrodite where myth has it the goddess washed ashore many moons ago.

Supposedly, Aphrodite seduced a young Adonis along the way to this rock, which is today one of the last truly rugged parts of the island.

Pafos is not tiny but it's also very relaxed, packing in a staggering range of ancient sites including gorgeous ancient Roman mosaics and rock-cut ancient royal tombs along with a marvellously relaxed seafront area and plenty of swell hotels.

Our favourites are the 5* Annabelle and right next door to it, Almyra which is great for families with small children but that also has a terrific adults-only spa zone overlooking the sea

Pafos is split into sections. Kato Pafos, or the lower town, and Pano Pafos, the upper town. The archaeological goodies are found below, but equally lovely Pano Pafos is where the locals tend to hang out.

Then there's the stunning countryside beyond, which erupted mid-March into a sea of fragrant blossoming almond trees and wildflowers. Who couldn't use some of that right now?

What is 'extractive tourism' and what can we do about it?

Watch as active volcano puts on show for tourists in Iceland

Can virtual wellness retreats really compete with a beach in Bali?