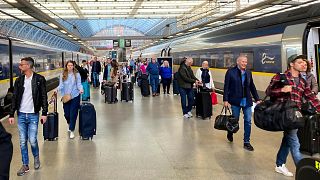 Border checks for British travellers introduced after Brexit have caused Eurostar’s peak capacity to drop by 30 per cent.

The rail operator is also facing “unique” financial pressures in the aftermath of the pandemic, having been hit hard by travel restrictions. It also says it is dealing with a shortage of engineers.

MP Huw Merriman, chair of the UK’s transport select committee, recently wrote to Eurostar enquiring about the closure of Ebbsfleet and Ashford international stations in Kent and the end of the company’s Disneyland Paris service.

This week he released the responses from outgoing Eurostar chief Jacques Damas, detailing the issues the company was facing.

Since roughly 40 per cent of Eurostar’s customers are British, this has caused a “significant increase in the processing times at these stations.”

Stamping passports adds at least 15 seconds to each passenger’s border crossing time, Damas explains in the letter. While that may not seem like a lot, with millions of people boarding the service every year, it adds up. On top of that, it makes electronic passport gates less effective as they don’t accept British passports in most EU countries.

In London and Paris, Eurostar says it is trying to remedy the problem. Space is extremely restricted at St Pancras Station but another passport control booth is currently being installed. French passport gates have been upgraded and, in Paris, more UK gates are being added.

But still, peak capacity through the stations is now around 30 per cent lower than it was before Brexit, the Eurostar chief says.

He goes on to add that the restricted timetables and limited capacity trains that have been running post-Brexit are the only way that the company can avoid daily queues in the centre of London. Damas compares the situation to the long lines seen at ferry ports after Brexit.

It means that Eurostar is unable to respond to the “high demand” for services linking capital cities. Reopening the Ebbsfleet and Ashford International stations in Kent would put too high of a strain on local police resources.

Eurostar faces other problems that could lead to delays

The EU is looking to introduce its Entry/Exit System (EES) by the end of May 2023. This large-scale IT system will see third-country nationals - non-EU, EEA or Swiss citizens - automatically monitored at border crossings.

The uncertainty regarding the EES “hangs over” Eurostar.

The aim is for this to replace passport stamps at border crossing points into the Schengen area like airports and seaports. Damas writes that the uncertainty regarding the EES “hangs over” Eurostar.

He also lists other concerns around the current economic climate in the UK and EU. People are working from home more, cutting the number of commuters using the service. While the energy crisis means costs are going up putting both passengers and the company under pressure.

Merriman posted the responses on Twitter, saying that the UK’s transport select committee will write to the “new Minister and Rail Regulator” sharing these “observations and interventions to support Eurostar; a vital cog in our transport system.”