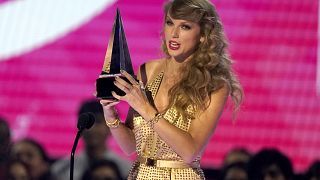 Taylor Swift was the big winner at the American Music Awards (AMAs) last night, taking all six awards in the categories she was nominated in.

Swift won the coveted Artist of the Year award as well as the Best Album award for ‘Red (Taylor’s Version),’ a re recording of her 2012 album ‘Red’.

Accepting her award Swift thanked fans and highlighted the value she places on her re recorded music, an undertaking the singer committed to after her master tapes were sold to a hedge fund by her previous record label.

"I cannot tell you how much my re-recorded albums mean to me, but I never expected or assumed that they would mean anything to you," Swift told the crowd.

"So I can't thank you enough for caring about this album that I'm so proud of."

Last night’s wins means that Swift now has a grand total of 40 AMAs.

Who won at the AMAs?

Despite Swift’s clean sweep there were many other notable winners on a night which saw emotional performances and some mild controversy.

Bisexual actor and singer Dove Cameron won Best New Artist and used her acceptance speech to dedicate her award to the queer community, as well as paying tribute to victims of Saturday’s shooting in an LGBT+ venue in Collorado, US.

"On the heels of what happened at Club Q in Colorado Springs, I want to remind everyone how important queer visibility is and how important our community is,” Cameron said.

"And I want to direct your attention to organisations like GLAAD and The Trevor Project for what you can do right now... Thank you for holding the space - I'm holding it for you too."

The most moving performance of the evening may have been Pink who sang ‘Hopelessly Devoted to You’ in a tribute to Grease star Olivia Newton-John, who died earlier this year.

Meanwhile, in a headline grabbing moment, former Destiny’s Child member Kelly Rowland remonstrated with the crowd when they booed Chris Brown, who was not in attendance. Rowland was accepting the Best Male R&B award on Brown’s behalf when the booing began.

“I wanted to tell Chris, thank you so much for making great R&B music and I want to tell him thank you for being an incredible performer. I'll take this award [and] bring it to you. I love you. Congratulations. And congratulations to all the nominees in this category."

Brown is a controversial figure due to his conviction for beating his then-girlfriend Rihanna in 2009.