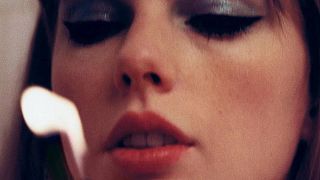 Taylor Swift’s latest album ‘Midnights’ has already surpassed 1 million units in the US, making it the top-selling album of 2022 so far.

Hardly surprising considering that it’s Taylor Swift we’re talking about, a national treasure who must be protected at all costs and who just seems to be getting better and better with every record she graces us with. These are just facts.

But it’s also worth noting that 'Midnights' broke the Spotify record for the highest number of streams on the first day of a release and has the largest sales week for any album since 2017, setting a modern-era record for single-week vinyl album sales… all in the space of three short days of sale.

According to initial reports to Luminate, whose data powers Billboard’s weekly charts, the album has earned more than 1.2 million equivalent album units in the US through its first three days of release.

Billboard reported that 'Midnights' sold over 800,000 copies in the US in its first day alone, including streams, digital downloads, and CD, vinyl and cassette sales.

The 32-year-old’s tenth album - her first original record in two years (if you don’t count the re-recordings of her early records due to a dispute with music mogul Scott Braun) - was released on 21 October.

It is a treasure of an album, featuring “a collection of music written in the middle of the night, a journey through terrors and sweet dreams.” It sees Swift leave behind the folky cottage-core diptych that was 2020's stunning 'Folklore' and the slightly more underwhelming 'Evermore', opting now for atmospheric synth pop. The results are not a full-blown reinvention by any means and may lack immediate earworms for some, but remain impressive - and get more addictive with each listen.

The current record it holds (over 1.2 million) was only previously reached by… you guessed it… Taylor Swift, for her album 'Reputation' in 2017, which debuted with 1.238 million in its first week (chart dated December 2017).

It gets better, as almost half the total units accumulated during the first three days of sale came in vinyl sales.

According to Luminate, nearly 500,000 copies were sold in the LP format over the weekend, more than half of the album’s actual sales total during that period.

Beyond the collectability factor, the streaming numbers don’t lie.

Billboard says that the 284 million streams racked up in these first three days was enough to already give 'Midnights' the third-biggest streaming week of 2022. The year’s largest streaming week was registered by Bad Bunny’s 'Un Verano Sin Ti', with 356.55 million (chart dated 21 May).

It’s assumed that 'Midnights'’ total units, sales and streaming figures will increase in the coming days. The tracking week ends Thursday 27 October and the final sales number is expected to be announced on Sunday 30 October.