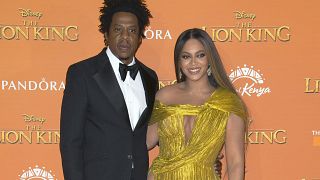 The 2023 Grammy Awards nominations have been revealed and have crowned Beyoncé the most-nominated artist in Grammy history. She ties with her husband Jay-Z, with a total of 88 nods.

Talk about a power couple.

Queen Bey leads the nominees with nine nods for her album ‘**Renaissance**.’ Closely behind her is Kendrick Lamar, who is now the first rapper to be nominated for Album of the Year for four consecutive albums. He scored eight nominations for his fourth album ‘Mr Morale and the Big Steppers’, while Adele and Brandi Carlile each got seven.

Both Beyoncé and Adele face off in the Record of the Year and the Album of the Year categories – Beyoncé for ‘Renaissance’ and Adele for her fourth album ‘30’ – as well as in the Song of the Year, with Beyoncé’s ‘Break My Soul’and Adele’s single ‘Easy on Me.’

If Beyoncé, who has already won 28 Grammys, wins at least four awards next year, she will beat conductor Sir George Solti's record of 31 Grammys. She is currently tied with Quincy Jones in second place.

Elsewhere, Puerto Rican rapper Bad Bunny made history by landing the first ever Album of the Year nod for an album, ‘Un Verano Sin Ti’, in the Spanish language.

British stars Harry Styles and Coldplay are also in the running for best album, alongside Swedish pop icons Abba, who received their first ever Album of the Year nomination for 2021's ‘Voyage’ – their first album after a 39-year hiatus.

As for Taylor Swift, she received multiple nominations for her re-recording of 2012's All Too Well. However, her latest album, 'Midnights', was released too late for inclusion in the 2023 field.

"'All Too Well 10' is the song I’m the most proud of, out of anything I’ve written. The fact that it’s nominated for Song of the Year at the Grammys, an award I’ve never won, that honors the songwriting... it’s momentous and surreal," Taylor Swift said in a story posted on Instagram.

The 65th Grammy Awards will take place on 5 February 2023 in Los Angeles.

Here is the list of nominees in several major categories:

Record of the Year

Latin Grammys 2022: A night of historic wins and surprises

Taylor Swift wins big in Germany at the MTV EMAs