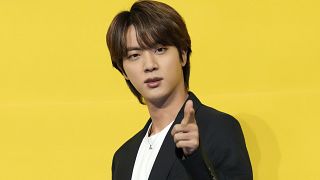 The members of the K-pop supergroup BTS will enlist in the South Korean military for national service, according to their agency. This puts an end to a years-long debate on whether the stars deserved exemptions from mandatory service.

Bighit Music, part of BTS's agency Hybe, said on Monday (17 October) that "the members of BTS are currently moving forward with plans to fulfil their military service".

The announcement by BTS comes just months after the band announced they would be taking a break, with some members pursuing individual projects.

"As each individual embarks on solo endeavours, it's the perfect time and the members of BTS are honoured to serve," noted Bighit Music in a statement.

Last week, Lee Ki Sik, the commissioner of the Military Manpower Administration, said that it was “desirable” that members of the K-pop group comply with requirements that all able-bodied men under the age of 30 perform 18 - 21 months of military service in the interests of fairness and because the country remains technically at war with nuclear-armed North Korea.

Refusing to complete one's mandatory service is a crime in South Korea, and can lead to imprisonment and social stigma. Exemptions from military service are granted to some elite athletes, such as Olympic medalists and to classical musicians - but pop stars do not qualify.

The band had previously won a deferral - when in 2020, South Korea's parliament passed a bill allowing the biggest K-pop stars to delay their duties until the age of 30.

The oldest band member, Jin, is currently 29. He will begin preparations next month, the band's management revealed.

"Group member Jin will initiate the process as soon as his schedule for his solo release is concluded at the end of October," added the statement. "Other members of the group plan to carry out their military service based on their own individual plans."

BTS are credited with generating billions for the South Korean economy, and this news does mean that fans of the world’s biggest boy band will have to be patient if they want to see BTS on stage again.

"Both the company and the members of BTS are looking forward to reconvening as a group again around 2025 following their service commitment," said their management company in a statement.