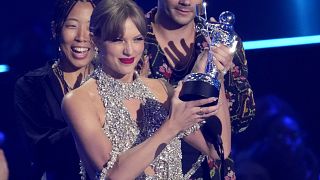 The 2022 MTV Video Music Awards (VMAs) came to a close on Sunday evening, and it was a chaotic old time, filled with all the announcements, profanity and controversies to keep the Twittersphere on the brink of a meltdown.

In a sure sign that pandemic-stymied touring was back in full swing, one of the year's biggest stars, Harry Styles, couldn't make it to the VMAs - which aired from New Jersey's Prudential Center - due to his own show at Madison Square Garden.

Styles won Best Pop and Best Cinematography for his song ‘As It Was’, before accepting the award for Album of the Year for ‘Harry's House’ via video. He then headed back to his own global concert run.

Another artist who was absent was Bad Bunny, the Puerto Rican Latin trap and reggaeton artist, who scored MTV's Artist of the Year award. He too shone by his absence, as he was busy with his own blockbuster tour, playing the second night of a sold out concert at Yankee Stadium that over the weekend drew some 100,000 fans. He too accepted the award via video.

The show is historically known for its antics than actual prizes, and this year’s edition did not disappoint.

The 59-year-old actor floated from the ceiling while wearing the iconic astronaut outfit with his face digitally inserted into custom's helmet.

"You know what? I needed the work," Depp told the audience.

The move to include Depp feels like a tasteless controversy-courting one on the VMAs' part, who transparently yearn to ruffle some online feathers and keep the Depp name trending.

The actor appeared later during the telecast to double down on the "joke", saying that he’s available “for birthdays, barmitzvahs, weddings, wakes, any old thing you need.”

The actor hadn’t made an appearance at the VMAs since receiving the Generation Award back in 2012.

And then came the really trippy stuff…

It started off with a mild buzz, with iconic stoner comedy duo Cheech and Chong awarding the Red Hot Chili Peppers with the Global Icon Award, before the California rockers performed and also paid tribute to Taylor Hawkins, the late Foo Fighters drummer.

Then came the heavier stuff.

Eminem and Snoop Dogg opened their performance sitting on a couch as Snoop smoked a giant - albeit fake - blunt, before the pair headed to the metaverse for a trippy, animated performance of their latest collaboration ‘From the D 2 the LBC’, which features on Eminem's greatest hits album ‘Curtain Call 2.’

These increasingly tiresome digital performances continue to be rammed down audiences throats and eyeballs and increasingly seem like a showy excuse for artists to fecklessly kick back and let their avatars do all the performing.

The death of live performances? Let’s not get ahead of ourselves, but this is a trend that needs to end.

Reasons to be cheerful

Leave it to Taylor Swift to restore our faith in humanity.

Swift was among the night's big winners, turning heads on the red carpet in a dress dripping with crystals before winning the night's top prize of Music Video of the Year for her 10-minute-long film 'All Too Well.'

"I'm so proud of what we made," said the 32-year-old, who has been making good on her vow to re-record her first six albums so she can control the rights to them.

Swift also mentioned that this year’s ceremony was historic, as “for the first time in VMA history, four of the directors nominated in the video of the year category are women.”

To mark the occasion, Swift then gave fans a gift, announcing that her “brand new album”, titled ‘Midnights’, will come out 21 October 21.

At midnight, she officially announced the release, describing it as a “collection of music written in the middle of the night, a journey through terrors and sweet dreams.” Twitter went spiralling in the aftermath and the phrase “meet me at midnight” began trending.

Another ray of (risqué) sunshine was Lizzo’s win for the Video For Good award - which honours videos with social or political messages - for her song ‘About Damn Time.’ Wearing a cone-bra corseted dress that recalled Madonna, the superstar exclaimed “Bitch I’m winning, hoe!”, which added itself to the many bleeped moments of the evening.

She then thanked fans for voting for her to receive the award before nodding to US politics.

"Vote to change some of these laws that are oppressing us," the star urged.

Elsewhere, Brazil's Anitta also turned heads with a terrific and very suggestive on stage performance before winning the award for Best Latin Video for ‘Envolver.’

"I was born and raised in the ghetto of Brazil, and for whoever was born there, we would never think this was possible," she said when accepting the trophy.

Who won at the 2022 American Music Awards?