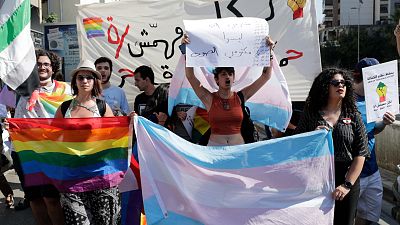 Activists from the LGBTQ+ community in Lebanon shout slogans as they march calling on the government for more rights in the country gripped by economic and financial crisis.   -   Copyright  Hassan Ammar/AP News
By Katherine Berjikian  •  Updated: 05/08/2022

The devastating explosion at Beirut's port two years ago, on top of Lebanon's deteriorating financial situation, has caused the number of people from the LGBTQ+ community seeking help to skyrocket.

In 2019, Helem, Lebanon’s first LGBTQ+ rights organization, started recording the number of people in need of financial support. Members of the organization were worried that state crackdowns, such as curfews, following mass anti-government demonstrations, would harm the community.

They found around 200 people needed aid. Most of them were members of the trans community.

By 2022, that list ballooned: more than 2,000 people were seeking help with cases of abuse or financial assistance, and over 1,000 people have contacted Helem for help with their mental health, food security, and medical bills.

“We woke up one day to find our currency devaluated, our city blown up in the middle of a pandemic and humanitarian crisis,” says Tarek Zeidan, the executive director of Helem.

“We found out that not a single organisation was equipped to handle LGBTQ+ people in the slightest, and even 90 percent, if not 95 percent, were unwilling to take on LGBTQ+ people and support them in any way,” he told Euronews.

An alarming increase in abuses

"The economic and financial crisis (in Lebanon) is likely to rank in the top 10 - possibly top 3 - most severe crises episodes globally since the mid-nineteenth century," according to the World Bank.

Around three-quarters of its population has been pulled into poverty, and tens of thousands of people have left the country. And the Lebanese pound has lost more than 90 percent of its value compared to the US dollar since 2019.

It’s in this environment that the number of violations against the rights of Lebanon’s LGBTQ+ community, including death threats and physical and domestic violence, have escalated.

Of the people who went to Helem for help, seeking free legal counselling and mental health support, around 60 percent were Syrian nationals.

The consequences of the Beirut blast

According to Zeidan, one of the reasons the blast had a devastating impact on the LGBTQ+ community was because pockets of the population lived around the Beirut port, where the explosion originated.

“Areas of Beirut adjacent to the port are notoriously well known for being LGBTQ+ friendly areas of the city,” says Zeidan. “Next to those areas was where the majority of working-class Queer people lived.

“Many of the people living there weren't landowners and had to find places that they could afford well outside of Beirut after the blast, which means that they faced massive amounts of discrimination and hate outside of these concentrated urban centres.”

In a 2021 report by Oxfam, which surveyed 101 members of Lebanon’s LGBTQ+ community, 58 percent of participants said the blast damaged their housing; 35 percent said they had to relocate; and 66 percent said they were not generating income when participating.

The unemployment rate in Lebanon as a whole stood at 29.6 percent as of January 2022, according to the UN’s International Labour Organization.

But according to Zeidan, the situation has become desperate because of the currency crash.

A silver lining in a deteriorating situation

The situation has not improved since last year.

“We are witnessing the same sort of intensity and violence that we had witnessed in 2021, meaning that the social and economic violations that we had have continued into 2022,” notes Zeidan.

“On a similar scale, there has been no improvement, no reduction in the number of cases that have come to us for humanitarian aid.”

In addition to the financial crisis, Lebanon is also particularly vulnerable to the global consequences of the war in Ukraine.

Russia’s invasion of Ukraine has sparked fears of food shortages, as Lebanon imported around 80 percent of its wheat from Ukraine prior to the war. “We are not at all independent from what's going on in Ukraine,” according to Zeidan.

And in recent months, authorities have started to target the LGBTQ+ communities, according to Human Rights Watch. The organization stated that the country’s interior minister called on a ban of gatherings “promoting sexual perversion” in an internal letter referring to the LGBTQ+ community, dated 24 June.

That same day, “officers from General Security, Internal Security, and the Internal Security’s information branch questioned both LGBTQ+ and feminist activists at a cultural center about a planned private seven-person workshop, telling them to cancel the event or apply for a permit,” according to the Human Rights Watch report.

Security forces also visited the offices of Helem, reportedly searching for documents such as registration papers.

But in light of this deteriorating situation, Zeidan assured Euronews that there is still hope.

“The only silver lining that I see is that the fight in Lebanon is a fight. That doesn't mean we are going to win. It just means that the topic has graduated to become a national, divisive, controversial issue, up for discussion as a political fight.”