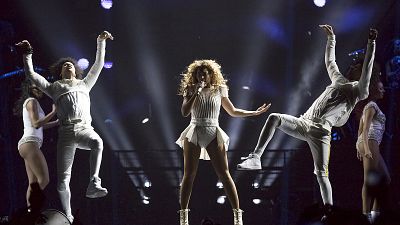 Queen Bey is back. Beyoncé Knowles-Carter’s seventh album ‘Renaissance’ is now out and the music world has come to a halt.

Released 29 July after Beyoncé launched the first single ‘Break My Soul’ last month, the queen of pop has broadened her oeuvre once again, this time taking on dance hall beats, 90s house, Afrobeats, and soul influences.

The release follows a leak two days earlier, after the album arrived at retailers in France.

It’s the first solo album she’s released in six years since her critically acclaimed album, ‘Lemonade’. Not that she took a break: in between releases, there was a joint-album with husband Jay-Z and her soundtrack work for ‘The Lion King’.

But despite being musically prolific, Beyoncé’s solo return feels monumental. Few artists have the artistic clout to stop the music press so abruptly with an album launch.

Beyoncé was on the front page of this month’s British Vogue magazine, is the number one trending topic on Twitter, has a banner announcing her album on Spotify, and every news publication is covering her latest album.

The articles range from reviews rushing to get their oars in and discussions over fan responses, to private life paparazzi intrusions and the now inevitable right-wing op-eds bemoaning artists that supposedly can’t be criticised.

There's even a conspiracy theory that's gaining traction online, linking Beyoncé’s multiple appearances on horses for the album to a doomsday prophesy. The four horseBey's of the apocalypse might be absurd, but it's an example of just how much hype she can drum up.

It’s a lot. There are only a handful of artists today who could elicit such a big and immediate response to a new album. That attention could also be said to extend to Rihanna, Adele, Kendrick Lamar, Taylor Swift, Kanye West, and not many more.

How has Beyoncé created so much hype and momentum around her releases? It’s not been an easy journey. But there are a few specific things she’s done to cement her place in music history.

Before Beyoncé was Beyoncé, she was one third of the supreme girl group Destiny’s Child. Had the output Destiny’s Child produced encompassed Beyoncé’s entire career, she would still have been part of one of the most successful music acts of the era.

Beyoncé and Kelly Rowland were the most consistent members of the group, with Michelle Williams joining for the critical and commercial chart-topping album ‘Survivor’. Between 1998 and 2004, the group released five albums that have gone on to sell over sixty million copies.

But at the height of the group’s popularity, with songs like ‘Independent Women’, ‘Survivor’ and ‘Bootylicious’ dominating the charts, Beyoncé felt the time was right to go solo.

And how right she was. Straight out of the gates, Beyoncé's debut solo single ‘Crazy in Love’ went to number one, as did her debut album ‘Dangerously in Love’.

Her bold decisions didn’t stop there though. Beyoncé has also stretched her acting muscles and starred in films such as 'The Pink Panther' and ‘Dreamgirls’.

She also kept on pushing the envelope with her music, releasing a self-titled visual album in 2013, starting an era of greater experimentation in her music.

After four consecutive solo albums hitting the number one spot in the US and multiple other countries, Beyoncé certainly had reason to believe she was on the right track.

So what does Beyoncé do? Disappear from the limelight.

Since her album ‘4’ in 2011, Beyoncé has opted for guerilla tactics when it comes to promoting her albums. Preferring to drop them without drumming up the usual media furore, she’s kept the press guessing as to her next move.

"When Beyoncé first dropped her self-titled album with no forewarning, it completely changed the way we think about music distribution," Molly Marsh, a music journalist says.

"We were still stuck in a 20th century, pre-digital mindset in terms of what releasing an album looked like, and she was the first mainstream artist to take advantage of the fact that just uploading the MP3s out of nowhere was possible," she continues.

The effect is that when she does release a new album, as with 'Renaissance', the press has to scramble to keep up with an era of music listeners with instant access to the songs through Spotify.

The visual album 'Lemonade' came after with each song accompanied by its own music video.

"She recognised the huge chunk of music listeners who were now receiving their music through visual platforms like YouTube," Marsh says. "Of course, smaller artists had done that before, but she set the trend in the mainstream."

It seems every artist's career now comes with endless nights spent on couches, laughing at Late Night talk show hosts’ rubbish jokes. Not if you’re Beyoncé. While she did the Vogue cover story this month, she eschews the public eye, meaning any information about her becomes gold dust.

Exhibit A: her marriage to Jay-Z. The duo is one of celebrity culture’s biggest power couples; but unlike Kim Kardashian and Kanye West’s marriage, we’re not treated to the quotidian goings-on of their private lives.

And it’s made all the difference to her elusive celebrity status. How many nonsense Kanye headlines can you read in a row before you become immune to their effect?

But when Beyoncé refers to marital issues in ‘Sorry’ on 2016’s ‘Lemonade’, everyone stops and listens.

Just like her appearance at Barack Obama’s inauguration and the Destiny’s Child reunion in her Super Bowl halftime show, Beyoncé understands the art of only hitting the headlines when she’s got something big going on.

Even with her documentted relationship woes, Beyoncé has managed to keep a pretty squeaky-clean record when it comes to controversies.

As one of the most successful artists of her era, with an estimated net worth in the billions, she’s made few enemies. She’s been involved in multiple philanthropic initiatives including BeyGOOD, an organisation she set up initially to help with recovery for Hurricane Harvey.

Beyoncé has also been very open about her political stances, unfazed by any potential big label fears of alienating fans. She’s supported Black Lives Matter, transgender rights, and demanded reforms on gun control in the US.

If there’s one way to stay in the public eye as a musician, it’s to keep releasing stone-cold classics.

Every solo album has gone straight to number one in the US, and she is the highest-earning Black musician of all time.

Her albums have sold over 100 million copies worldwide, not including the sixty million she sold with Destiny’s Child.

She’s won 28 Grammy Awards and is the most honoured singer, male or female, by the Grammys. She also has the honour of most nominations in Grammy Award history, currently at 79.

And those accolades are all likely to increase as the press and public finally get their hands on 'Renaissance'.