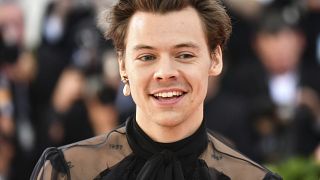 Harry Styles has ruffled more feathers than his elaborate blouses often have with his latest comment on his sexuality.

Speaking to Better Homes & Gardens, he discussed his right to not reveal the fine details of who he does or doesn’t sleep with to the press, finding the expectation “outdated”.

“I’ve been really open with it with my friends, but that's my personal experience; it’s mine,” he told the magazine.

“The whole point of where we should be heading, which is toward accepting everybody and being more open, is that it doesn’t matter, and it’s about not having to label everything, not having to clarify what boxes you’re checking.”

Styles’ comments immediately drew both condemnation and applause from social media. Some claimed he’s absolutely right to demand his privacy. While others critiqued his privilege as an ostensibly straight man to be able to remove himself from discussions while still embracing a queer aesthetic.

His critics have often accused him of “queerbaiting”.

What is queerbaiting and why does Harry Styles get accused of it?

The concept of queerbaiting is defined as when someone or something takes the aesthetics of queer culture without a commitment to identifying with LGBT culture at large.

Queerbaiting is especially considered problematic when a queer aesthetic is used to garner the financial support of the LGBT community, without any outwardly queer identifying people associated.

To critics, queerbaiting allows people a free ride on the aesthetic without the personal difficulties associated with openly identifying as queer in a hetronormative world.

“We, as queer people, are right to demand ever more representation and celebration of our existence and the incredible variety and diversity within our communities,” explains Dr Justin Bengry, lecturer in Queer History at Goldsmiths, University of London.

“When we critique someone's behaviour as 'queer baiting', however, we are asserting a point about their intentions and not just their actions. In effect, we are accusing that they are wilfully misusing their privilege and even deceiving us about their own understanding of themself to attract attention and even benefit socially and financially from that attention. It might be that they are, in fact, doing precisely that!”

Many of the accusations against Harry Styles started with the release of his second solo album “Fine Line” in 2019. Around this time, his personal style became increasingly flamboyant as he started to add elaborate dresses to his wardrobe.

Not long after Fine Line, Harry Styles started employing radical clothes designer Harris Reed to create the clothes he’d wear on his next tour and for many public events. One of the most notable outfits was one Reed designed for a Vogue cover shoot, a black suit with prominent shoulders under which a white and pink skirt blossomed out.

Styles also co-chaired the 2019 Met Gala which had the theme “What is Camp?” and has been quoted saying “we’re all a little bit gay”.

So it might seem that with Styles’ continued use of queer aesthetics through cross-dressing and his previous statements are at odds with his most recent request to not be labelled.

Multiple people on Twitter expressed frustrations with what they considered queerbaiting.

User @jeromanoff wrote: “That would be nice if that was the case, but queerness is under attack constantly. Especially in some states where u can't even say gay. We can't all live in 2050 where ambiguous sexuality is the norm. We are living in 2022 and we need allies who will be loud and stand with us.”

Is the accusation of queerbaiting fair?

Though Styles certainly has his fair share of critics for his comments, there is a deeper discussion about whether his actions are queerbaiting at all.

“The challenge for me in evaluating and even accusing a person or organisation of queer baiting is that there is a significant difference between how we can and should engage with someone's presentation of themself and how a brand or corporate body may be playing with queer possibility in commercial advertising or media,” Bengry continues.

“I'm much more comfortable levelling accusations of queer baiting to commercial and visual media, products that have a clear brand association and which prioritise commercial intent.”

“Of course, in the world of celebrity culture that line between a person and a brand becomes a bit blurry, and self-presentation becomes part of marketing oneself even if it is doing so through suggestions of personal identity,” he says.

Importantly, he doesn’t actually claim to not be queer in the interview, only to not want to discuss his identity in the public sphere. As much as that is the source of a lot of his critics’ ire, that decision makes a lot more sense when given later in the interview, he discusses how much stress he was under when his entire private life was on display in the One Direction years.

Others have also pointed out that being queer isn’t just about sexuality. Gender-non-conforming expressions of identity are also part of being queer.

Styles consciously outward expression of comfort in gender-non-conforming clothing could be seen as an expression of queer identity.

“To wear Harris’s clothes is to be having fun,” Styles told the New Yorker regarding Harris Reed’s designs.

“Every frill is there to be played with, and an overwhelming sense of freedom shall rain down upon you.”

Another important point some make is that Styles use of clothing and gender signifiers are also not the property of the queer community, explains Otamere Guobadia for i-D.

“In this arena of expression and becoming, queerness has no designated look. It may feel that our gender nonconformity is hard-won, its presence and glorification in public spaces the result of our tenacious struggle against the grain of normality.”

“But it is not our property. The queer countercultural cannot be bottled or claimed. Gender and its manifest signifiers have no domain, no rulers nor legislators, no oaths of allegiance, and certainly no price of admission,” he says.

“Queerbaiting critique levelled at public figures, rather than having any liberatory effect for queer people and communities, has a deleterious function — it further essentialises queer identity, distilling it into a list of aesthetic and performed tasks.”

“It forces them to choose words to define, or in some cases confine, their experiences of gender and sexuality into forms that are pleasing and recognisable to us, their audience. It is a bitterly ironic inversion of the demands that a heterosexist society has spent time immemorial wrongly demanding of us,” Guobadia continues.

Queer history lecturer Dr Bengry also notes it’s an incorrect assumption that we have only just entered into a world of queer expression. “We have incredible histories of sexual and gender diversity and fluidity across period, place and culture.”

“This historical reality of our incredibly queer past should inspire us to consider the possibility at least of a wonderfully queer present, in which people, whether celebrities or not, need not define themselves with labels that we choose for them even if that might satisfy our needs to be seen and validated. So, just as someone might be 'potentially straight' and exploiting that privilege to use the subversive potential of queerness to draw attention to themselves, that person might also be 'potentially queer'. Or they might be something else that, for them at least, doesn't really fit into those labels,” he says.

People’s obsession with Harry’s sexuality is SO WEIRD to me. Let him live and direct your energy to those punching down at the LGBTQ community, not actively lifting it up https://t.co/Aijg9btkOW

And maybe we should all just chill out on accusations of queerbaiting for the people who are celebrating queer styles, suggests Jack Remmington.

“People’s obsession with Harry’s sexuality is SO WEIRD to me. Let him live and direct your energy to those punching down at the LGBTQ community, not actively lifting it up,” he says.