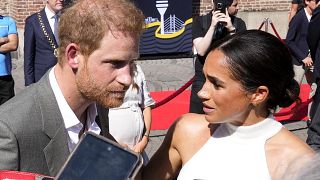 The UK's Prince Harry and singer Elton John are among several public figures suing the publisher of the Daily Mail newspaper over alleged phone-tapping and other breaches of privacy.

The others taking part in the legal action are Elton John’s husband and filmmaker David Furnish, Elizabeth Hurley, Sadie Frost and Baroness Doreen Lawrence, the mother of Black teenager Stephen Lawrence who was murdered in a racist attack in 1993.

A statement released on Thursday by law firm Hamlins, which is representing Prince Harry and Frost, said that the six had “become aware of compelling and highly distressing evidence that they have been the victims of abhorrent criminal activity and gross breaches of privacy” by Associated Newspapers Limited (ANL).

It said the breaches included “the hiring private investigators to secretly place listening devices inside people’s cars and homes”, commissioning the bugging of private telephone calls, the payment of police officials for “sensitive information”, impersonating individuals to obtain medical records and "the accessing of bank accounts, credit histories and financial transactions through illicit means and manipulation".

“They have now therefore banded together to uncover the truth, and to hold the journalists responsible fully accountable, many of whom still hold senior positions of authority and power today,” Hamlins said in its statement.

ANL, publisher of the Daily Mail, The Mail on Sunday and the Mail Online said it “utterly and unambiguously refute these preposterous smears, which appear to be nothing more than a preplanned and orchestrated attempt to drag the Mail titles into the phone-hacking scandal concerning articles up to 30 years old.”

“These unsubstantiated and highly defamatory claims – based on no credible evidence – appear to be simply a fishing expedition by claimants and their lawyers, some of whom have already pursued cases elsewhere.”

This is far from the first time damage claims over unlawful activity have been levelled at newspapers in the wake of the UK’s phone-hacking scandal over 10 years ago.

The scandal centered on the illegality at the News of the World, which led to the paper closing and the Leveson Inquiry - the judicial public inquiry leading to the Leveson Report in November 2012, which reviewed the ethics of the British media and made recommendations for a new, independent body to replace the existing Press Complaints Commission.