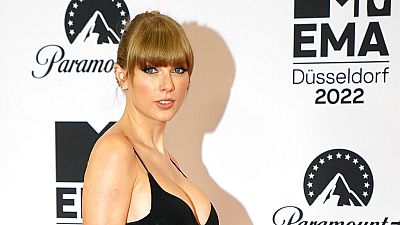 Taylor Swift posted a story Friday on Instagram expressing her anger and frustration over the Ticketmaster fiasco   -   Copyright  Martin Meissner/AP   -
By Euronews  with AFP, AP  •  Updated: 18/11/2022

The American pop star, Taylor Swift, spoke out on Friday against the ticketing debacle that took place this week, as many fans were unable to purchase tickets for her upcoming tour on the Ticketmaster platform.

Taylor Swift posted a story on Instagram expressing her anger and frustration over the hours spent by fans trying to buy tickets for her tour next year.

“I'm not going to make excuses for anyone because we asked them, multiple times if they could handle this kind of demand and we were assured they could,” she wrote.

“It's truly amazing that 2.4 million people got tickets, but it really pisses me off that a lot of them feel like they went through several bear attacks to get them.”

"And it's excruciating for me to see mistakes happen with nothing I can do," she added.

Many fans of the singer complained on social media of massive delays, bugs, and soaring prices during the advance sales of Swift's upcoming tour next year.

On Thursday, Ticketmaster even canceled the public sale that was supposed to start on Friday, "due to a particularly high demand (...) and an insufficient stock of remaining tickets".

The problems have reignited the debate on Ticketmaster's monopoly, which has long faced complaints.

US Democratic Senator Amy Klobuchar announced that there will be a Congressional hearing to investigate the website.

Anti-monopoly and consumer protection groups have recently called for an investigation of the group, which they say is in a position to "drive up prices, impose unnecessary and costly fees and exploit artists, independent venues and fans."

Following the chaos, Ticketmaster said: "While it's impossible for everyone to get tickets to these shows, we know we can do more to improve the experience and that's what we're focused on."

Taylor Swift wins big in Germany at the MTV EMAs