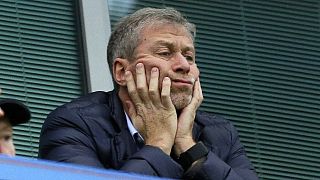 Roman Abramovich is latest to be placed on UK sanctions list amidst cultural blackout for Russia after Ukraine invasion   -  Copyright  Matt Dunham/AP
By Tim Gallagher  •  Updated: 10/03/2022

As Russian tanks rolled into neighbouring Ukraine pressure grew on high-profile figures across the cultural sector to renounce Putin's invasion.

However, since then the disgust at Russia's actions has spread and, as western leaders scramble to respond with economic sanctions, big names in food and fashion retail have become the latest to join the cultural front of the war in Ukraine.

Meanwhile Chelsea football club could see its fortunes altered as long-time owner Roman Abramovich has has his assets frozen by the UK government.

Art, music and sport have all long been areas where president Vladimir Putin has sought to project soft power. Now business bosses, whose chains have spread into Russia since the fall of the Soviet Union, are joining the artists and musicians boycotting Russia.

Will a shortage of fast-fashion and coffee to go add more pressure to the ballet-bans and cancelled gigs make a difference? Let’s take a look at who’s cancelling culture.

Fast food, fast fashion, and luxury items alike may soon by scarce in Russia as a plethora of retail giants have said they would limit or suspend their operations in the country.

After extreme pressure from consumers Coca-Cola, Starbucks and McDonald's all announced they were pulling out of the country this week. Even Japanese giant Uniqlo have announced their withdrawal from Russia in an astonishing u-turn after previously claiming their clothes were a "necessity".

Meanwhile beauty brands including L'Oreal, Estee Lauder, and Dove (owned by Unilever) hsve put an end to their sales due to the war in Ukraine.

In a statement L'Oreal said, "We strongly condemn the Russian invasion and the war in Ukraine, which is causing so much suffering to the Ukrainian people."

All of the French owned company's stores, concession counters and e-commerce operations in Russia will be suspended.

Elsewhere upscale denim brand Levi's and Austrian jewellery designer Swarovski have both closed their stores, and in a further blow to Russian fashion lovers Condé Nast have ended sales of all their product, including Russian Vogue which has run for 20 years.

Citing concerns over new censorship laws in the country, Condé Nast said in a statement, "We continue to be shocked and horrified by the senseless violence and tragic humanitarian crisis in Ukraine.

"It is paramount that we are able to produce our content without risking the safety and security of our staff."

A full list of retailers and products pulling out of Russia includes:

The music, film and TV industries have all joined in the exodus over Putin’s actions and moved to cancel tour dates or stop their products from appearing on Russian screens, amid messages of support from celebrities.

Big hitter Universal Music Group (UMG) who recently acquired Neil Diamond's back catalogue and recently acquired k-pop group BTS, have suspended all operations in Russia over the Ukraine invasion. Meanwhile Live Nation have said they will no longer promote live tours in the country.

Streaming giants Spotify and Netflix have both suspended their operations in the country to different degrees, while Hollywood studios Sony, Warner Bros, and Disney have all cancelled releases for the foreseeable future.

Elsewhere, a sea of musicians from Eric Clapton to Icelandic songstress Björk have pulled out of tour dates in Russia. The exodus of talent comes as Russia was banned from entering Eurovision 2022 after initial pressure from Finland, who have been under threat from Putin due to their consideration of NATO membership.

From Pyotr Tchaikovsky to Wassily Kandinsky, Russia has long been an established producer of high art and culture. However, artists and other cultural figures on the world’s opera and ballet circuits have come under as much pressure as oligarchs in the aftermath of Russia’s war.

Conductor and Putin-ally Valery Gergiev has attracted particular ire for his closeness to the president which has stretched to supporting the annexation of Crimea and performing for the Russian army in bombarded Syrian cities.

Thanks to his silence the Russian Maestro was first dropped from tour dates with the Vienna Philharmonic Orchestra, and later lost his position with the Munich Philharmonic as well.

Meanwhile, opera star Anna Netrebko had to withdraw from appearances in New York’s Met Opera (where she was due to sing in Puccini's 'Turandot') over her refusal to repudiate Putin. Described as “One of the greatest singers in Met history” the celebrated soprano has since suspended all performances until further notice, cancelling scheduled dates in Zurich, Milan, and Hamburg.

Putin has long lauded Russia’s sporting and athletic prowess as something the country can be proud of and many believe that he will be badly damaged at home due to the losses sustained by the nation in this area.

Following bans for Russia from both UEFA championships and the World Cup, Chelsea FC is the latest football casualty after owner Roman Abramovich was sanctioned by the British government. Thanks to the sanctions Chelsea can no longer sell tickets, merchandise or trade players on the transfer market, although special measures will allow existing ticket holders to attend.

Meanwhile, Formula 1, whose Grand Prix is closely associated with president Putin, have torn up their Russian contract and cancelled the September race in Sochi and scheduled 2023 contest in St Petersburg. All races for the foreseeable future are also suspended.

In perhaps the biggest blow, the Paralympics committee have said no Russian or Belarussian athletes will be able to compete in the Beijing Winter Paralympics. The move came after protests from athletes around the world that the two nation’s competitors would be able to attend under neutral colours.