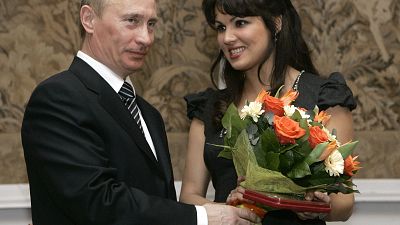 Putin congratulates Netrebko after awarding her with the People's Artist of Russia honour in 2008   -   Copyright  Dmitry Lovetsky/AP
By Euronews  with AFP  •  Updated: 03/03/2022

Russian soprano Anna Netrebko, who is facing criticism for alleged complacency towards Russian President Vladimir Putin, will withdraw from her planned concerts at the Met Opera in New York this spring, the New York establishment announced Thursday.

"Failing to comply with Met conditions to repudiate her official support for Vladimir Putin's war in Ukraine, soprano Anna Netrebko has withdrawn from her upcoming concerts at the Met for Puccini's 'Turandot' in April and May as well as for Verdi's + Don Carlos + in the next season," the Opera said in a statement, adding that Ukrainian soprano Liudmyla Monastyrska would replace her for the opera "Turandot".

“It is a great artistic loss for the Met and for opera,” said Met General Manager Peter Gelb in a statement. “Anna is one of the greatest singers in Met history, but with Putin killing innocent victims in Ukraine, there was no way forward.”

Netrebko announced Tuesday that she was stepping down from the stage "until further notice."

"After careful consideration, I have made the extremely difficult decision to withdraw from concerts until further notice," she said in a statement.

But her ensuing silence and thus failure to issue an outright condemnation led the world-famous arts institution to act.

The ban has been issued not just for this season of Opera, but also the next, rendering it entirely likely that it will be for the foreseeable future.