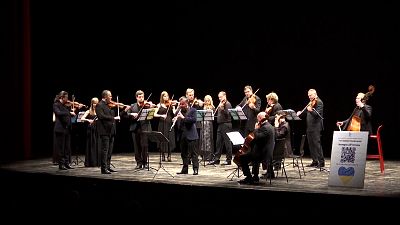 Musicians in a Ukrainian chamber ensemble stuck in Italy after the Russian invasion of their homeland hold back their tears as they play for peace   -   Copyright  AP Photo
By Theo Farrant  & AP  •  Updated: 04/03/2022

A prestigious Ukrainian chamber ensemble is stranded in Italy, where it arrived just as the Russian invasion of its homeland was about to begin.

Now, the musicians have turned a tour of Italian cities into a fundraising effort, with concerts calling for peace.

The fifteen members of the 'Kyiv Soloist, National Chamber Ensemble' performed earlier this week (2nd March) in the southern Italian city of Bari, and requests for further concerts in other cities are increasing daily.

But their thoughts are constantly with their families and loved ones as the Russian army intensifies its offensive on Ukrainian cities.

Using their instruments to send out a message of peace

They perform next to a sign with a large heart drawn in the blue and yellow of the Ukrainian flag and a QR code for donations to Ukrainian troops.

Concern and anger at the news coming from their home towns makes their instruments vibrate and has even led them to change the programme.

Alongside pieces by Vivaldi and Albinoni, there is no longer place for a piece by the 19th-century Russian composer Stepanovich Arensky.

It would be an inappropriate homage to Russian music, they feel. A kind of betrayal.

In its place is a piece by Ukrainian composer Maxim Sozontovich Berezovsky.

"It's very difficult to play"

Double bassist Igor Patsovskyi has a wife, daughter and mother in Kyiv who have no way of getting out.

"It's very hard to play, my soul and my heart are breaking while I'm playing," he says.

Unable to return to their homeland, the orchestra decided not to down their instruments but use them to draw attention to the crisis their compatriots are living through.

"We had no chance to return to Ukraine now in this moment. And we decide to make this work, follow Ukrainians, civilians and (the) Ukrainian national army when we're playing and we reveal the problem, we reveal the situation that is in Ukraine now," saysPatsovskyi.

In the hours leading up to the performance they nervously switch between their instruments and their mobile phones, to get updates from their families or to watch worrying news reports and videos of the bombings.

More than the score, it is the dramatic images of war that fill their minds.

Violinist Kateryna Mysechko's family is in Ukraine, except for her sister who is safe in Europe.

"(I have) difficult feelings when I'm playing this music. I'm just thinking about the shootings, about shootings in our cities. It's very difficult to play," she says.

Unable to see their families back home

From the moment they heard the news their only thought was to return to Kyiv, but the air blockade has forced them to continue their two-week tour, together with Francesco Di Rosa, first solo oboe of the orchestra of the Academia Nazionale di Santa Cecilia in Rome.

The players do not know when they will finally be able to embrace their families again, and the tour will definitely last longer than planned, as it has now become their opportunity to send out a message of peace.

Each evening the musicians put on their concert outfits and put bows to their instruments for their families and country.

And they receive a standing ovation from the audience, for them as musicians, and for an entire people.

World Book Day: War and Peace - What do Europeans read in a crisis?