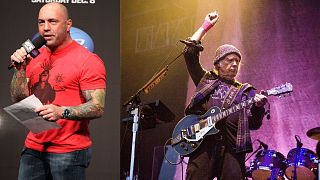 The row between Spotify and Young was sparked by COVID conspiracies on the podcast "the Joe Rogan Experience"   -   Copyright  AP Photo
By Tim Gallagher  •  Updated: 11/02/2022

The row over Spotify's editorial policy rages on as a growing number of artists leave the platform in solidarity with Neil Young.

Home to 180 million subscribers, Spotify came under scrutiny after Young demanded the removal of his music from the platform over its continued relationship with podcaster Joe Rogan.

Young – a polio survivor at the age of 6 – took issue with Rogan's podcast, 'The Joe Rogan Experience', which is hosted and funded by Spotify, for legitimising COVID-related conspiracy theories.

A number of Young's musical peers such as longtime friend and fellow polio survivor Joni Mitchell have since followed his lead.

Here's everything you need to know about their battle and every artist that has left Spotify since.

What happened on Joe Rogan's podcast?

During the discussion with the prominent vaccine sceptic, both Rogan and his guest aired the unsubstantiated view that hospitals are financially incentivised to falsely diagnose deaths as ‘caused by COVID'.

Malone said people had been “hypnotised” into taking the vaccine and likened the pandemic to the rise of the Nazis in 1930s Germany.

YouTube removed the video edition of the conversation on 4 January, but the episode itself remains on Spotify.

Young published a now-deleted open letter to the streaming giant and claimed “fake information” on the podcast was endangering lives.

“They can have Rogan or Young. Not both,” the star wrote.

In response to Young’s complaints, Spotify removed his music.

This isn't the first time the pair have butted heads. Young has long been critical of Spotify over their sound quality and removed his work from the platform in 2015 temporarily.

In a further open letter the singer claimed, "If you support SPOTIFY you are destroying an art form."

The singer has continued to publicly address Spotify since his request was fulfilled.

Most recently, he called for employees at Spotify to leave their jobs, saying "get out of that place before it eats your soul."

Spotify has courted controversy over their reported exploitation of artists before.

But this latest development has placed renewed pressure on the streaming giant. The company's line – that they are a platform, not a publisher – has received criticism in a similar manner to that which Facebook (now called Meta) has received over extremist content.

More so when you consider that Spotify paid a reported $100 million for Rogan's audio content.

What does the Spotify/Joe Rogan deal mean for these artists?

In 2020 Spotify signed a reported $100 million deal with Rogan to host his podcast exclusively on the platform.

The move is seen as part of a wider plan by Spotify to monopolise the podcast market, and since 2019 the company has bought major podcast producers Gimlet Media, Anchor, and Ringer.

“This is part of Spotify’s bigger bet on podcasts. Spotify is buying not only Joe Rogan’s extensive and future content library, but also his loyal audience,” research analyst Stephanie Liu told the New York Times.

Rumours abounded that Rogan – famed for hosting far-right figures Milo Yiannopoulos, Gavin McInnes, and Alex Jones on his podcast – would be censored when he moved to Spotify.

However, Rogan himself has disputed this claim.

In a conversation on a podcast episode with fellow comedian Fahim Anwar about corporate censorship, Rogan emphatically denied any censorship by Spotify.

“They don’t give a f—k man. They haven’t given me a hard time at all,” the comedian said.

Listeners following Rogan to Spotify were dismayed when it was revealed that some episodes had not been transferred to the streaming platform including his interviews with Yiannopoulos and Jones.

However, this appears to be the extent of Spotify’s intervention and Rogan later invited Jones back onto his show for a second interview.

In defence of their non-editorialising stance, Spotify CEO Daniel Ek said “Joe Rogan is just one out of eight million creators on the platform.”

“We have a lot of really well-paid rappers on Spotify too that make tens of millions of dollars, if not more, each year from Spotify. And, we don’t dictate what they’re putting in their songs either,” the streaming boss told Axios.

What is Spotify’s history of censorship?

A quick look at Spotify’s recent history shows some inconsistency in Ek’s statement.

On 9 February the podcasts of far-right essayist Alain Soral were removed for "non-compliance" with their content policy.

Back in 2018, the company courted controversy when, in response to the criminal sex charges against him, they promised to stop promoting R. Kelly’s music on their playlists.

In 2017 music by artists with white supremacist views was deleted in response to an attack on a protester in Charlottesville, Virginia.

Rogan himself has run afoul of Spotify staffers who allegedly threatened a walk out over transphobic content in 2020.

It is believed the same year staffers forced an uncharacteristic apology from Rogan after he repeated the conspiracy theory that Oregon wildfires were started by left-wing anarchists.

The row with Young has thrown renewed scrutiny on Spotify's editorial policy, particularly in regards to misinformation.

Following the singer's intervention leaked messages from the Spotify Slack channel showed Dustee Jenkins (Spotify’s head of global communications and public relations) reassuring colleagues that several episodes of Rogan’s podcast had been reviewed and found not to meet the threshold for removal.

Jenkins did however concede that “What Spotify hasn’t done is move fast enough to share these policies externally.”

Spotify has pledged to add a content warning to Rogan's podcast and, in what is seen as an attempt to quell the outrage, Rogan himself issued an apology and pledged to "try harder" to make his episodes more balanced.

Every artist that has withdrawn or protested Spotify: