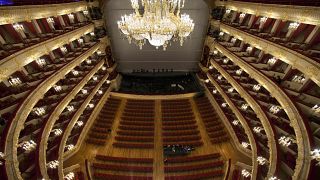 A chandelier hangs over the main hall in the Bolshoi Theater during a press tour organized by the theater's restorers, Moscow, Russia, Saturday, Oct. 8, 2011   -   Copyright  Alexander Zemlianichenko/AP
By Tim Gallagher  with AFP  •  Updated: 08/03/2022

Two dancers have ended their association with Russia's Bolshoi Theatre over the country's invasion of Ukraine.

Brazilian David Motta Soares and Italian Jacopo Tissi announced their resignation from the Russian cultural institution on 7 March citing solidarity with Ukrainian victims of the conflict.

The pair join a mass exodus of cultural figures and businesses from the Russian cultural scene.

"It is with deep sadness that I left the Bolshoi Theatre, my teachers, my colleagues, my friends and the place that I have called home for so many years," the 24-year-old Brazilian wrote on Instagram.

His compatriot Victor Caixeta, second soloist at the Mariinsky Theatre in Saint Petersburg, also announced his departure from Russia on Monday after five years, specifying that it was a "break" and not a resignation. On Instagram, he said he felt "the pain of all the Ukrainian people".

"I can't pretend nothing has happened. I can't believe this is happening again and I thought we learned lessons from the past," added David Motta Soares in his post illustrating a photo of him performing a dance move.

Mass exodus as culture is cancelled in Russia

David Motta Soares stressed that he had "a lot of friends" in Ukraine: "I can't imagine how much they must be suffering right now, my heart is with them!".

David Motta Soares, who grew up in Cabo Frio, a seaside town 150 km from Rio de Janeiro, joined the legendary Bolshoi dance school in Moscow at the age of 12.

He graduated from this school in 2015, won a prize in a competition for young dancers that same year and rose to the rank of soloist.

Tissi, principal dancer at the Bolshoi, added his resignation later that day.

"I am shocked by this situation that is happening to us overnight, and quite honestly, I find myself unable to continue my career in Moscow, at the moment," the dancer said on Instagram.

In addition to the stars of the Bolshoi, Briton Xander Parish, principal dancer at the Mariinsky in Saint Petersburg, also announced his departure from the famous ballet on Sunday evening.

“Tonight I was supposed to perform ‘Giselle’ at the Mariinsky Theatre, but instead, because of this terrible crisis, I made the difficult decision to leave Russia, at least until peace returns,” said a statement on Instagram.

The Bolshoi Theatre, which is located in Moscow, had already received a blow with the resignation of its musical director, the Russian conductor Tugan Sokhiev, who said he was under pressure to take a stand on events in Ukraine.

On 25 February, the Royal Opera House in London announced the cancellation of Bolshoi performances scheduled for this summer, due to the Russian invasion of Ukraine.