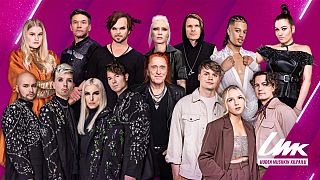 Finland's public broadcaster Yle says it will boycott this year's Eurovision Song Contest in Turin if Russia is allowed to take part.

While other Nordic nations like Sweden, Norway and Denmark, along with Netherlands and Ukraine, have called for Russia to be excluded from this year's contest, it is believed the Finns are the first country to publicly state that they'll pull out if their demands are not met.

"Russia's aggression in Ukraine goes against all the values that Yle and other European broadcasters stand for" Ville Vilén, Head of Creative Content and Media at Yle said in a press release Friday.

"Yle will always defend Western democracy, the fundamental principles of the rule of law, freedom of expression and human dignity. Yle cannot be involved in an event in which Russia, which has blatantly attacked these values, can use one of Europe's best-known brands to promote its own interests."

Vilén said he hoped the European Broadcasting Union will "act according to its values in this regard."

The statement from Yle comes on the eve of the UMK - New Music Competition - to choose Finland's 2022 Eurovision entry.

Among the artists set to compete on Saturday night in the west coast city of Turku are veteran rock band The Rasmus, plus a host of new young artists including Isaac Sene, Younghearted, and Cyan Kicks.

"We will have some great songs and artists in the finals this year as well. I believe and hope that one of them will have the opportunity to perform in May for all of Europe".

EBU so far reluctant to exclude Russia from the event

The Eurovision Song Contest is scheduled to take place between 10-14 May in Turin, Italy, and the contest is split into two semi-final heats before the grand final on Saturday 14th.

Both Russia and Ukraine are listed as performing in the first Semi-Final on 10 May. Ukraine is currently scheduled to end the first half, and Russia the second.

Despite calls from at least half a dozen countries for Russia to be cut from the competition, the EBU has been reluctant to make that move. In a statement released Thursday, organisers said the song contest "is a non-political cultural event."

"The EBU is however concerned about current events in Ukraine and will continue to closely monitor the situation.”

Ukraine pulls out of Eurovision Song Contest after political drama