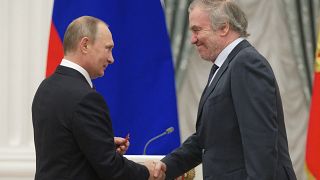 Perhaps one of the more obscure perils of holding myriad roles in your creative life is the ability to lose, or have those roles snatched from you, at more or less the same time.

This is the case with Russian conductor Valery Gergiev.

Then the honorary presidency of the Edinburgh (twinned with Kyiv, don't forget) festival.

Then the musical directorship of both the Verbier and Lucerne festivals.

And now, on Tuesday, The Munich Philharmonic Orchestra has decided to "separate" from him.

The mayor of the German city accused the maestro of not having denounced the invasion of Ukraine.

"Munich is parting with principal conductor Valery Gergiev. There will therefore be no more concerts of the Munich Philharmonic Orchestra under his direction from now on",  Dieter Reiter explained in a press release.

Gergiev's closeness to Putin, whom he has known since 1992, and his loyalty to the Russian president on the annexation of Crimea, as well as his participation in concerts in bombarded South Ossetia and in Palmyra alongside the Syrian army, have been the subject of much controversy over the past decade. But only now are they conducting the direction of his professional life.

Until this moment, the 68-year-old Director-General of the prestigious Mariinsky Theatre in Saint Petersburg was one of the most sought-after conductors in the world.

On Monday, the Philharmonie de Paris and two prestigious Swiss festivals announced that they had cancelled several concert dates featuring Gergiev in support of Ukraine.

"The invasion of Ukraine by Russia will lead the Cité de la Musique – Philharmonie de Paris to modify its programming over the next few months in solidarity with the Ukrainian people. (...) The concerts (...) scheduled on April 9 and 10 in the Grande salle Pierre Boulez have already been cancelled”, the Philharmonie wrote in a press release.

At the same time, two prestigious classical music festivals also dismissed the conductor: the Verbier Festival, which announced that it had "requested and accepted" Gergiev's resignation from the post of musical director of its orchestra, and the Lucerne Festival, which canceled two concerts planned for this summer, as a sign of "solidarity" with "the Ukrainian people".

“We are deeply concerned and condemn in the strongest terms the attack on Ukraine and on innocent people,” said Michael Haefliger, director of the Lucerne festival.

In addition, the Edinburgh festival, the world's largest live performance event, also announced that it had "requested and accepted" the resignation of the conductor.

"The Edinburgh International Festival Board has requested and accepted the resignation of Valery Gergiev as Honorary Chairman of the festival," organisers said in a statement. "Edinburgh is twinned with the city of Kyiv and this decision is taken in sympathy with, and in support of, its citizens."

The day before, La Scala in Milan had asked the globetrotting conductor to plead publicly for a "peaceful solution" to the conflict, threatening to part with him for two next performances scheduled for early March.

"I don't think he will be there, I think we can rule him out at this stage," Milan Mayor Guiseppe Sala told reporters on Monday of the March 5 concert.

Hailing "one of the greatest conductors of all time", he explained on Facebook that he could no longer defend the interests of his client, "who will not want, or will not be able, to publicly put an end to his support of long-standing to a regime that has committed such crimes".