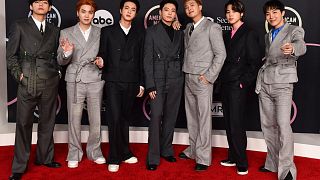 Korean pop superstars BTS are heading back on tour this spring, announcing four dates in April for their 'BTS Permission to Dance on Stage - Las Vegas' show.

The concerts will take place in front of a live audience a the city's Allegiant Stadium, with other fans who don't secure tickets for the main show can watch a live video broadcast at the nearby MGM Grand Garden Arena. Additionally, the final show in the series on 16th April will be streamed online.

The Las Vegas tour dates come four months after the last BTS shows in America, which took place in Los Angeles in November and December.

Since then band member Jimin had surgery for acute appendicitis. He then caught COVID while in hospital but his record label said he only had minor symptoms.

Ahead of the Las Vegas shows BTS will play three dates at the Olympic Stadium in Seoul.

The South Korean entertainment company behind BTS - as well as pop acts like Justin Bieber and Ariana Grande - announced a surge in profits on Tuesday, up almost 31% last year.

Although concert revenues for 2021 had recovered somewhat from the 2020 slump, they were still lower than pre-pandemic levels as COVID restrictions on touring and events continued to make an impact.

However, Hybe has diversified into more merchandise sales - with more than 4,000 items on offer - which increased 22%; launched a social media and e-commerce platform called Weverse which lets fans connect with artists; published games and digital comics feature the BTS members; and licensed music for commercials and films.

This year Hybe has plans to release BTS NFTs, publish web novels in 10 different languages, and launch a new video game in the summer.

Hybe's biggest artists BTS, Justin Bieber and Ariane Grande spent a combined total of 22 weeks on top of the US Billboard Hot 100 charts during 2021.